JONESBORO – The family of a longtime Craighead County educator has established a scholarship in the Arkansas State University College of Agriculture and Technology (CoAT) to honor her memory.

Virginia Doris Craig taught what is now known as family and consumer sciences for more than 20 years of her 28-year career in the Lake City/Riverside public school system. She also taught in the Noble and Dixie school districts, and retired after having taught for four years at Ridgefield Christian School in Jonesboro.

A graduate of the University of Central Arkansas, she earned a specialist’s degree in community college teaching with a focus on vocational education at Arkansas State in 1988.

Her husband, Gerald Craig, is also an A-State alumnus, where he earned bachelor’s and master’s degrees in the CoAT. For many years, he served as A-State’s director of financial aid.

One of the couple’s children, Rebekah Craig, is director of research development in A-State’s Office of Research and Technology Transfer. The couple’s other three daughters, Susan Utley of Elkhart, Indiana; Dr. Debora Brown of Fort Worth, Texas; and Dr. Elizabeth Paschall of Camden, Tennessee, all earned undergraduate degrees at A-State.

After Doris Craig’s death in 2014, Gerald Craig said he and his daughters decided a scholarship would be a fitting way to remember his wife.

“Because she spent so much time teaching vocational education in home economics, and because we both had earned degrees out of the College of Agriculture and Technology, my family and I thought this scholarship would be a lasting tribute that would help those who are working toward an advanced degree at Arkansas State,” Gerald Craig said.

Women pursuing a of Master of Science in Agriculture degree with an emphasis in vocational-technical administration may apply for the Virginia Doris Craig Memorial Scholarship after they have been admitted to the college’s program and have completed 18 hours of coursework.

“This is the first scholarship that supports students who are pursuing an advanced degree in vocational-technical administration,” noted Dr. Timothy Burcham, CoAT dean. “We appreciate the Craig family’s investment in the College of Agriculture and Technology.”

The announcement of the scholarship’s creation was announced at the annual College of Agriculture and Technology’s student awards banquet, which is a facet of Arkansas State’s Convocation of Scholars observance. For more information about the Virginia Doris Craig Memorial Scholarship and other scholarship opportunities at Arkansas State University, visit AState.edu/a/finaid/. 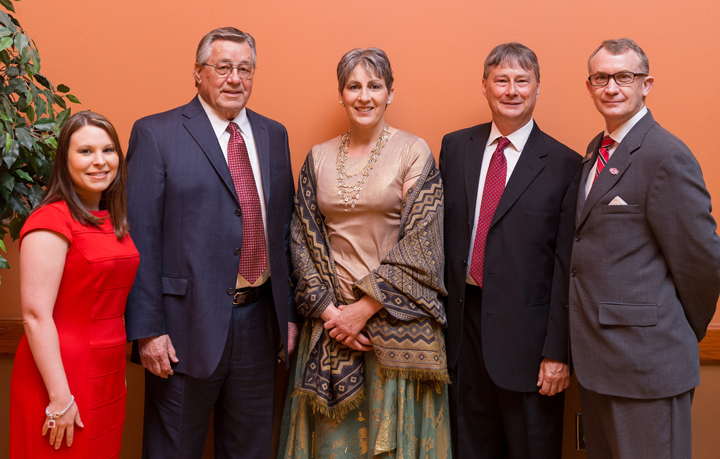 From left: Kasey Eakins, director of development, Gerald Craig of Lake City, Dr. Elizabeth Paschall and David Paschall of Camden, Tennessee,  and Dr. Timothy Burcham, dean of the College of Agriculture and Technology.