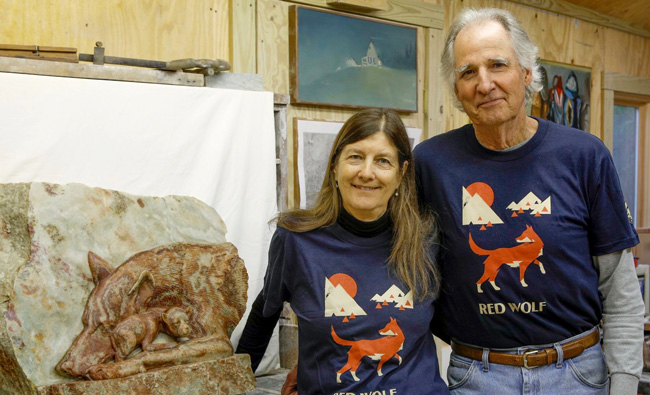 Loti Woods and Dale Weiler of Weiler Woods for Wildlife with "Just Settling In."

JONESBORO – Progress toward development of the American Red Wolf Conservation & Research Center (ARWCRC) at Craighead Forest Park in Jonesboro continues with investments of $575,000 to support the collaborative project led by Arkansas State University.

Additionally, Weiler Woods for Wildlife recently donated its original “Just Settling In” sculpture, which has been on loan and on display at Bradbury Art Museum, to A-State for permanent display.

The ARWCRC will escalate A-State’s role in education, preservation and population growth for the American red wolf, which is the most critically endangered wolf in the world. Only about 250 red wolves, which are native to Arkansas and the southeastern United States, remain alive with fewer than 17 known to be in the wild in North Carolina.

“Our vision for this facility is lofty, and we’re grateful for these generous early commitments of support to help us move forward,” said Dr. Tom Risch, vice provost of research and technology transfer at A-State, who is involved in national red wolf conservation efforts. “This is an extraordinary undertaking not only for the benefit of national red wolf conservation, but also for students and faculty who want to embrace this opportunity for wildlife ecology education and research.”

Preliminary plans, subject to fund-raising efforts, call for a 5,600-square-foot education and operations facility and six highly secured fence enclosures on 10 acres to oversee at least 12 red wolves from the existing population managed by the national Red Wolf Species Survival Plan program. Participation in the SSP breeding program is designed to assist in the USFWS goal of doubling the red wolf population in captivity.

USFWS support for A-State’s work in red wolf conservation has been considerable, Risch said. In addition to grants for red wolf enclosure construction expenses, the federal agency has designated the university’s Arkansas Center for Biodiversity Collections as the national specimen bank for blood and tissue samples.

The ARWCRC is also expected to establish Jonesboro as a national ecotourism destination for visitors, said Jeff Hankins, vice president for strategic communications and economic development for the Arkansas State University System and the project leader with Risch.

“We’re creating a unique national research and conservation laboratory for our students and faculty that could also have a $60 million economic impact on Northeast Arkansas tourism over the next decade,” Hankins said. “Potential students and travelers are looking for unique experiences, and this center will create one. The American red wolf is an iconic and important species in the ecosystem, and it just happens to also be A-State’s beloved mascot. We’re uniquely positioned to escalate red wolf education, research, awareness and population with a collaborative development.”

“We still have a lot of work to do to raise the funds for this project through private gifts and corporate sponsorships,” said Hankins, who is leading fund-raising efforts. “Investments in this center will result in significant benefits to a critically endangered species in need, while also enhancing A-State growth and economic development in Northeast Arkansas.

Hankins noted that A-State’s work in red wolf conservation has specifically attracted the support of new benefactors such as Weiler and Woods, who had no previous connections to the university. The couple’s $50,000 gift to the ARWCRC follows their contribution of $25,000 in January 2020 to establish the Weiler Woods Red Wolf Conservation Scholarship.

“We are excited to be supporting the Red Wolf Conservation & Research Center both financially and by donating Dale's red wolf sculpture,” Woods said. “This project has a special place in our hearts because it will educate the public about these iconic American native animals, expand the breeding capacity for rewilding red wolves all while using art to spread awareness.”

Weiler’s original 200-pound alabaster stone sculpture “Just Settling In” depicts a red wolf with her pup. It has been temporarily on display at Bradbury Art Museum and will be permanently featured at the new red wolf facility as part of a planned endangered species art collection. Soon a casting of the sculpture will be featured at the Embassy Suites Red Wolf Convention Center in Jonesboro. The couple’s website – weilerwoodsforwildlife.com – and artwork promote conservation of endangered species. They were recently featured in a First Horizon Bank “Unstoppable Spirits” video.

Bobango, a longtime supporter and 1978 graduate of Arkansas State, is chief manager of Memphis-based law firm Farris Bobango PLC. He is past international president of Pi Kappa Alpha Fraternity.

“It’s been a joy to be an advocate for Arkansas State across the country through the years,” Bobango said. “Lisa and I love the benefits of this red wolf conservation project. From conservation to education to regional economic development, A-State is playing a critical role in a national project. We’re proud to be part of this initiative.”

Interested donors, sponsors and supporters for A-State’s red wolf conservation projects may contact Hankins for more information at jhankins@AState.edu or (501) 660-1004.