Students Stay 'Up 'til Dawn' to Set Record Support for St. Jude 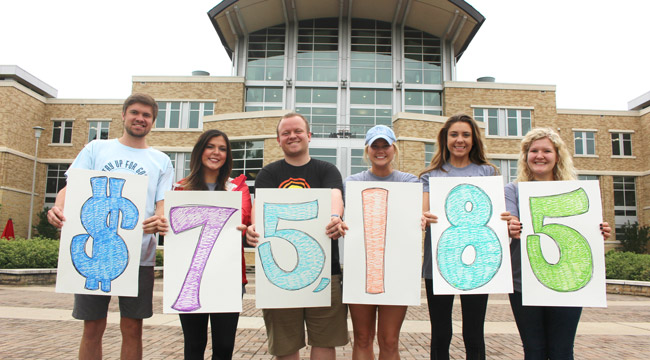 Some of the members of the Up 'til Dawn student executive board who are proudly displaying the organization's record-setting results are (from left) Evan Caddy of Bryant, Sarah Howard of Bryant, Robert Morris of Jacksonville, Marisa House of North Little Rock, Hannah Hefner of Kansas City and Hannah Aldridge of Jonesboro.

JONESBORO – Once all figures were counted, Arkansas State University students participating in the "Up ’til Dawn" fundraising weekend surpassed their goal and raised $75,185 for St. Jude Children’s Research Hospital in Memphis.

This landed A-State as the ninth-best UTD fundraising program in the nation, according to Jordan Booth, the St. Jude representative.  Continuing an annual tradition of outstanding results, A-State broke into the top-10 fundraising schools for the second year in a row; last year they were 10th.

"It was an incredible year. We overcame adversity to reach our $75K goal for the kids, and without the executive board and the constant support from students, it would not have been possible," said Caleb Strain of Bryant, UTD executive director.  "To reach #9 in the nation speaks volumes about Arkansas State University as a whole. We strive to give back to others and to make a difference, which is why I love A-State. This campus is built around people who are trying to make a difference, and through Up 'til Dawn we do just that.  I can't wait to see what next year has in store for us."

After the Up 'til Dawn weekend of activities in March, the UTD participants continued collecting donations from students, faculty and staff, with receipts through April 15 counting towards this year’s fundraising tally.

The record-setting total was up more than $13,000, or 22 percent, over last year, according to Booth.  Katey Provence, coordinator of student services in the A-State Leadership Center, said there were more than 100 students who actually stayed “up ’til dawn” on March 11 at the Red WOLF Center.

With a very generous $5,000 donation, this year’s event was presented by Richardson Orthopedics & Spine Surgery in Paragould.