JONESBORO –Hannah Shell, a senior at Arkansas State University, was recently honored for her work with the United Way of Northeast Arkansas as the winner of the 2017 Best Use of Video Award by United Way Worldwide in Alexandria, Va.

“I am humbled beyond words,” said Shell. “Thank you so much to United Way for awarding me the 2017 Best Video Award. I was so inspired by all the people I had the opportunity to meet. United Way will always have a very, very special place in my heart.”

Shell, a strategic communications major from Batesville, served as an intern for United Way of NEA from August through December 2017. She is also a member A-State United Way, a non-profit on-campus organization. Each fall the organization hosts “United We Dance,” a fundraising event that provides students an opportunity to give to the A-State campaign for United Way of Northeast Arkansas.

As an intern, Shell’s primary role was to create videos and other publicity efforts to promote A-State United Way and United We Dance. She created two videos to endorse the event and encourage students to attend and a third video featuring highlights from the evening. All three videos were shared across various social media platforms.

“The first video was shared more than 2,200 times just from our A-State United Way Facebook page. We were excited to see the video counts come in and students were tagging each other and sharing the video because they saw themselves or someone they knew in the video,” said Shaila Creekmore, director of business development for United Way of NEA.

“Hannah’s United We Dance video demonstrated talent, commitment to the United Way mission and immense creativity,” said Andrea Sok, director of Young Adult & Multicultural Engagement for United Way Worldwide. “She was well deserving of the Best Video honor and we hope her work will inspire other students to get involved with Student United Way to create change for communities around the world. We are so pleased to award her best video and look forward to following her many accomplishments to come.”

Shell’s prize was an all-expense paid trip for her and a friend to Alexandria, Va., to visit United Way Worldwide’s headquarters and Washington D.C., June 26-29.  She also attended the Executive Forum on Philanthropy with a presentation and backstage visit with Chris Bashinelli, former star of the HBO series “The Sopranos” and most recently host of “Bridge the Gap” on PBS and the National Geographic Channel.

She also attended “A Concert and Conversation with Peter Buffett” where she also had a private meet and greet with the philanthropist, musician and son of Warren Buffett. 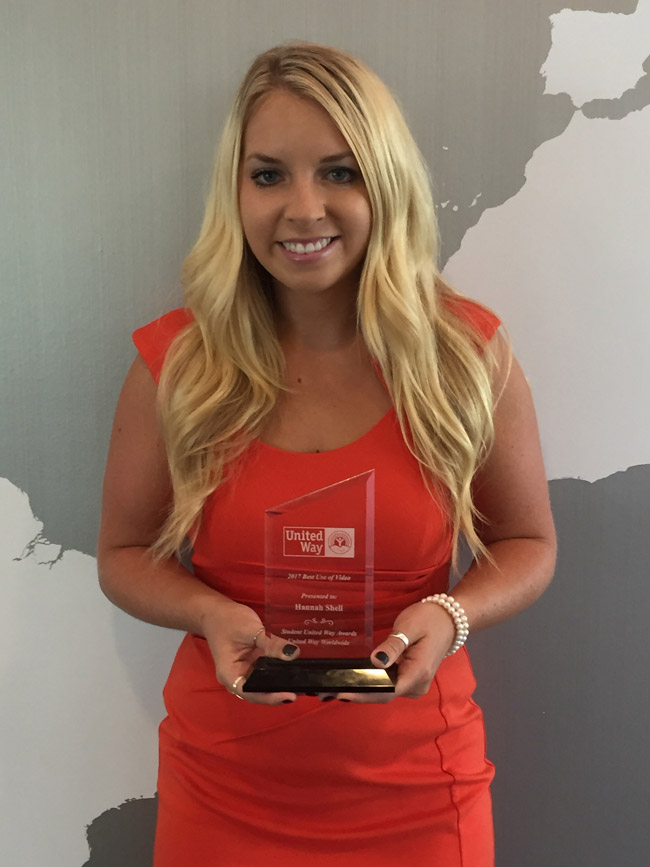