Launched earlier in 2014 for iOS, A-State SmartCampus allows students, alumni and followers of Arkansas State to keep up with activities and events on their mobile devices.  The app is free for users of either iOS or Android.

The Android version is available in the Google Play Store for download.  Android device users can search “A-State SmartCampus” or use the link AState.edu/SmartCampus to locate the app.

Along with access to streaming content from KASU, the public radio service of A-State, and Red Wolf Radio, the student internet-based radio station, A-State SmartCampus includes news feeds from the university, the Herald, and athletics.

For A-State students, SmartCampus includes a log-in portal into individual’s accounts for access to class schedules and other student-oriented information.

Like the iOS version, SmartCampus for Android is a collaboration of the Center for Digital Initiatives, the Department of Information and Technology Services, and Office of Marketing and Communications.

The lead developers were all A-State employees or students.  Roshan Gautam from CDI was the team leader.  Josh Parrish of ITS also served as a developer on the project.  The programing team worked with the project management group of Dr. Andrew Sustich from the Office of Research and Technology Transfer, director of CDI Dr. Alyson Gill, director of ITS Henry Torres, and executive director of marketing and communications Dr. Bill Smith. 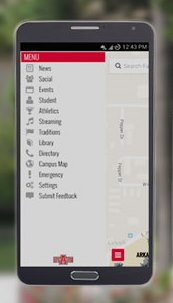