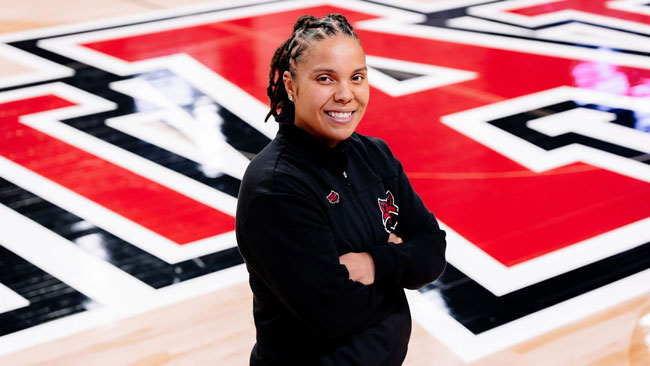 Rogers will be introduced at a press conference at 11:00 a.m. Monday inside the First National Bank Arena auditorium. The press conference is open to the public and will also be streamed live on A-State Athletics’ Facebook page (@AStateRedWolves).

“Following a comprehensive national search, we are excited to announce Destinee Rogers as our next head women’s basketball coach,” Bowen said. “The large amount of interest we received in the position was a direct reflection of not only how highly regarded our women’s basketball program is, but also a testament to our student-athletes, University and community. We had many conversations with outstanding candidates, but during the course of the search process, it became clear that Destinee was the perfect fit to lead our program.

“When we promoted Destinee to our interim head coach this past December, she immediately united the team in the face of adversity. Her high character and leadership traits were on display throughout the remainder of the season, and she always put our student-athletes first while providing them with the best opportunities for success both on and off the court. Our interviews with Destinee following the season reaffirmed those very things, as well as gave us additional insight into her vision for our program, strong knowledge of the game, coaching skills and philosophies. We look forward to Destinee leading our women’s basketball program into the future.”

Under her watch, A-State won six of her first seven games at the helm, including a 3-1 start to Sun Belt Conference play before losing leading scorer Keya Patton to a season-ending injury. Despite having one of their most dynamic players sidelined with an injury, the Red Wolves remained competitive down the stretch of the regular season as they dropped only one contest by more than double digits before closing with an 82-75 road victory at eventual Sun Belt Conference tournament champion UT Arlington.

“I am grateful to Dr. Kelly Damphousse and Tom Bowen for giving me the opportunity to continue leading this great program,” Rogers said. “I am committed to our student-athletes and will continue to do my part in helping them become the best that they can be on and off the court. We will create a culture that our fan base will be proud to support. I am excited to officially get to work as the Head Women’s Basketball Coach at this elite university.”

Rogers guided guard Lauryn Pendleton to Sun Belt Conference Freshman of the Year laurels – just the second player to earn the honor in program history and the first since 1997.

“Coach Rogers took over a team in the midst of very trying circumstances,” A-State Chancellor Kelly Damphousse said. “I carefully watched her and her student-athletes respond when injuries and defections depleted their bench. Our many discussions following the end of the season give me complete confidence that Destinee Rogers is the right person to move our team forward as we continue our quest for a conference championship.”

The Strong, Ark., native joined the A-State women’s basketball program in 2019 as an assistant coach before being elevated to associate head coach in 2020. Rogers also owns experience as a head coach at the high school level in the state of Arkansas, serving as the girls’ head coach at El Dorado High School from 2016-19. During those three seasons, she guided the Wildcats to a 52-28 record, including a 21-8 mark in her first season with a state semifinal finish.

Rogers’ first full-time coaching assignment came at her alma mater of Central Arkansas, where she also was a three-year starter at point guard for the Sugar Bears. She helped UCA to a 78-45 ledger in her time as an assistant coach, including 45-18 in the final two seasons. She helped recruit and develop two Southland Conference Players of the Year, a Southland Conference Freshman of the Year and eight all-league players.

As a player, Rogers helped UCA to a 2012 Southland Conference Championship and was the floor general when the program made its first Division I postseason appearances, hosting UAB in the 2011 WBI and traveling to Oklahoma State in the 2012 WNIT.