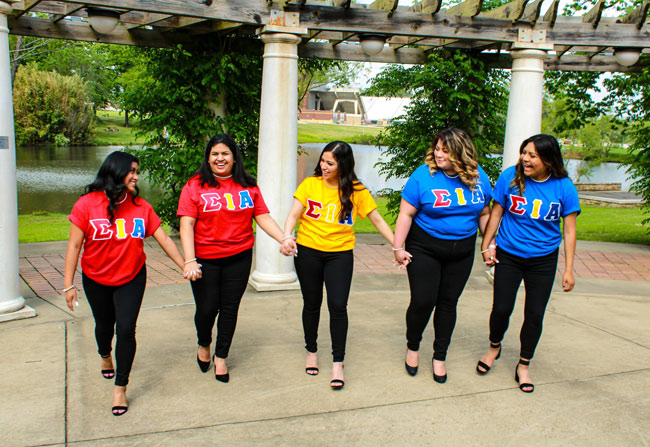 They are celebrating its colonization during the week of Sept. 27-Oct. 1. The group is observing SIA Week, including the group’s Founders Day on Wednesday, and its first “informational” meeting Thursday.

Members of the new sorority have been highly involved in this year’s Hispanic Heritage Month celebration at A-State, helping host the Latin Food Festival and the Heritage Museum event with the Multicultural Center and El Centro Hispano last week.

The group's informational session for prospective members is 6-8 p.m. Thursday, Sept. 30, in the St. Francis River Room of the Union. SIA’s goals include improving public awareness of the Latin culture, both among members and the broader community, promoting sisterhood and leadership, and to stand for excellence and education among women.

“Being a part of something so historic has been one of the highlights of my college career,” said Katheryn Vivar of Bryant, president of SIA at A-State.  “This has been a long journey, but with the support that we have received from the student body, I believe that this will be an organization that will help unite the students and bring more awareness to the community.”

Gabriela Huerta of Little Rock, who led the group’s drive to associate with SIA, noted, “Bringing a Latin sorority to Arkansas State University’s campus is something that has been long overdue. Although we are a Latin-based sorority we are not Latin exclusive. By having Hermandad de Sigma Iota Alpha, Incorporada on our campus we hope to expand the awareness of our Latinx culture while helping to increase the enrollment and retention rate of our minority students along with providing a home for the students on our campus.”

The sorority also will host “cooking with the SIAs” through an online platform, and SIA Loteria Night at 6 p.m. Monday, Oct. 11, in Centennial Hall. Loteria is a traditional card game often called Mexican bingo. Participation in these and other activities are serving to strengthen the new organization as it takes its first steps toward success.

“Bringing this sorority to A-State has been life changing,” added Roxana Flores of Jonesboro. “I have found a wonderful group of girls that share the same goals and values as me. They encourage and support me in every aspect of my life, and I want that same opportunity for all current and future women seeking higher education.”

A-State now hosts chapters of nine national sororities and 15 national fraternities in its Greek life program, according to Booker Mays III, assistant director of fraternity and sorority life in the Division of Student Affairs.