JONESBORO –  Prints by Evan Lindquist will be featured in an upcoming exhibition, “Legacy,” opening on Thursday, Aug. 28 and continuing through Oct. 1 at the Bradbury Gallery in Fowler Center, 201 Olympic Dr., at Arkansas State University.

This exhibition is a tribute to Lindquist, emeritus professor from the A-State Department of Art.

Lindquist, who last fall was appointed Arkansas's first Artist Laureate by Gov. Mike Beebe, will present a gallery talk Friday, Sept. 5, at 5:30 p.m.  Admission is free and the public is welcome.

In addition to "Legacy," a second show, “Selections: From the Delta National Small Prints Exhibition,” will run simultaneously.

During his long, successful and influential career, Lindquist has received numerous accolades, including two lifetime achievement awards for his impeccably crafted engravings.  His work has been featured in more than 300 exhibitions and can be found in collections throughout the United States and abroad.  He has inspired countless students to become printmakers and has touched the lives of many admirers through his works of art and enthusiasm for his field.

In “Legacy” and "Selections," Lindquist is recognized for two of his best-known accomplishments.

“Legacy” features his prints produced over the past decade since his retirement from A-State in 2003.  Still extremely active, he continues to create in his signature style - flawless, intricate works that are at once thoughtful and visually stimulating.  These prints are physical reminders of his ceaseless fascination with engraving, his chosen print form.

“Selections” will feature several examples of prints that have received purchase awards from past “Delta National Small Prints” exhibitions.  Lindquist’s efforts to promote appreciation for printmaking and for the artists who create it led him in 1996 to found this annually held, juried print competition.  This exhibition will run in conjunction with “Legacy” to remind viewers of this exceptional contribution Lindquist has made to the university.

Two distinct series are featured in “Legacy.”  The first depicts individual engravers.  Each is represented with some indication of an important aspect about the artist, such as attributes of their contribution to printmaking, hints about their professional life or perhaps Lindquist has created them in a style similar to that in which the artist worked.  For example, in his most recent piece titled “Master ES Invents Cross-Hatch Shading,” Lindquist uncharacteristically distorts the perspective of the architectural structures in the background as if Master ES himself had produced the piece.

The second group of prints is loosely and effectively drawn, while the majority of the first series is produced in great detail.  This second set represents the natural world and our relationship with it. His beautiful looping lines animate the sky, the land and the sea reminding the viewer of earthly wonders and the responsibility to them.

After the public talk on Sept. 5, a reception will be held immediately following the talk at Sara Howell Gallery on Main Street in downtown Jonesboro, where another exhibition of Lindquist’s work can be seen.

The exhibition, the gallery talk and the reception are admission-free and open to the public.  For more details contact the Bradbury Gallery at (870) 972-3471, by email at bradburygallery@astate.edu, or visit the website, bradburygallery.com. 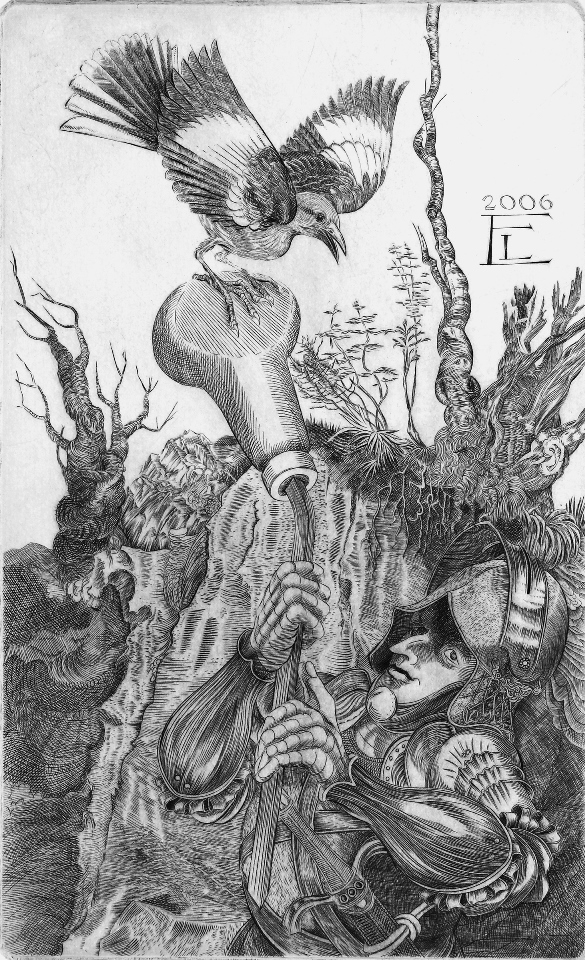