JONESBORO —  The Lecture-Concert Series at Arkansas State University in Jonesboro will present an online masterclass with Colin Williams, associate principal trombonist for the New York Philharmonic, at 6 p.m. on Sunday, April 25, via Zoom.

Williams will work with student trombonists from around the state, and will be available for a question and answer session towards the end of the masterclass session.

Prior to his 2014 appointment with the Philharmonic, he served as the principal trombonist with the Atlanta Symphony Orchestra for twelve seasons and with the San Antonio Symphony for three seasons.

Not only is Williams a passionate performer and versatile educator, he is also an advocate for musician’s wellness. During his tenure in Atlanta, he experienced a severe injury to his lip muscle, diagnosed as a tear in the orbicularis oris. This injury took him out of his performing career for nearly an entire season and resulted in years of lingering pain. This journey through injury, recovery and mental health shapes his unique approach to teaching and playing the trombone.

In 2018, Williams released his debut solo album “Ash,” embracing the crisis of injury and identity alongside his determination to return to the stage, to provide for his loved ones, and to transcend the barriers of language through music.

Williams can be heard on the album “Roadwork” by the Atlanta Trombone Project, which was comprised of himself and then-members of the Atlanta Symphony Orchestra. This project would serve as the impetus for the first Southeast Trombone Symposium in 2010, which has since become an internationally acclaimed workshop and festival.

With generous funding from the A-State Lecture-Concert Series, this session is free of charge and open to the public. 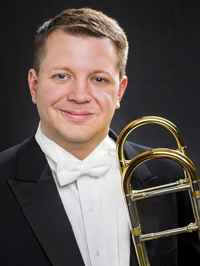