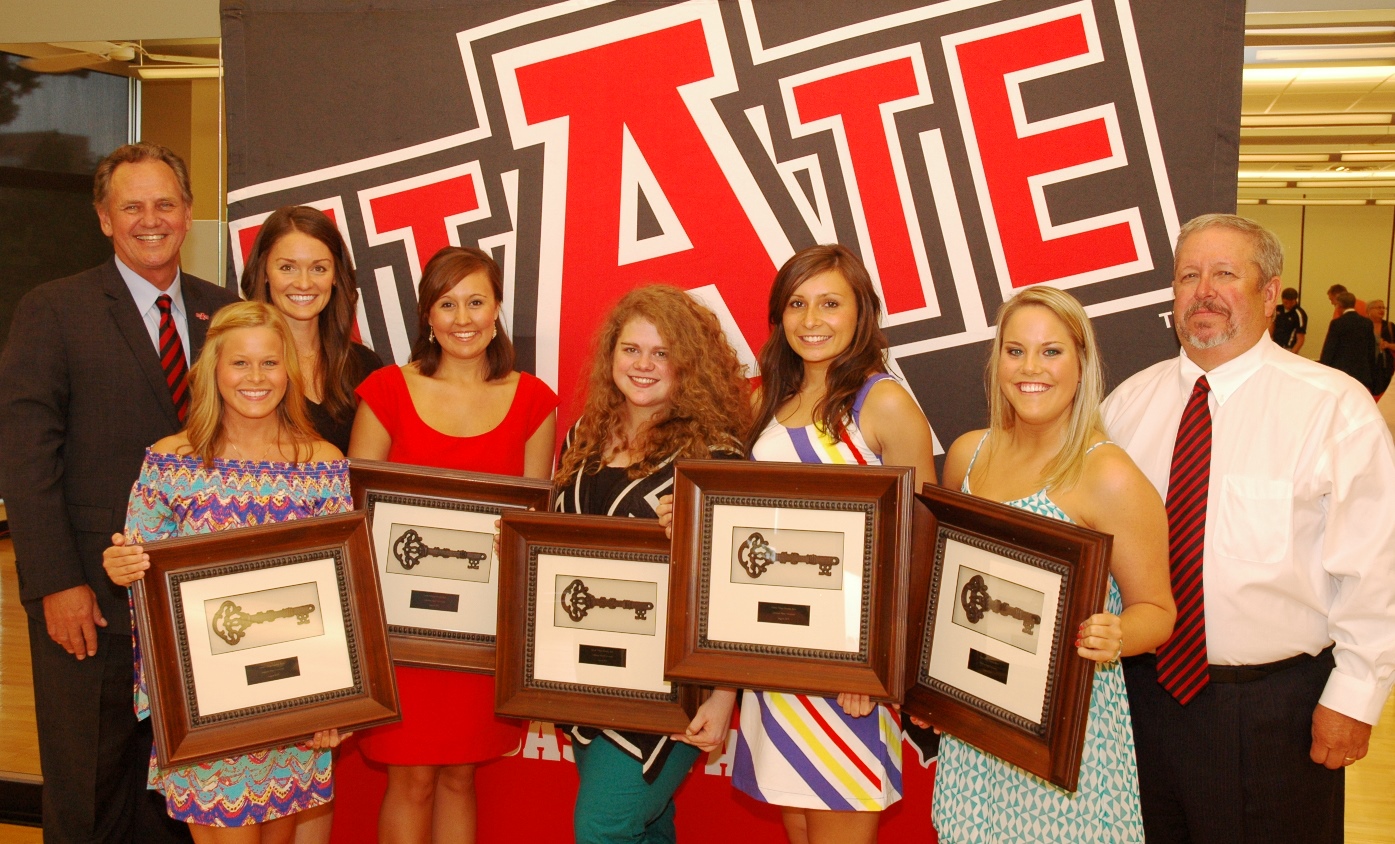 JONESBORO – The construction phase of Sorority Row at Arkansas State University is winding down, but the move-in and occupation phase is about complete!

At what was called a “showcase” event, representatives of the five sororities along with the chapter alumni advisers gathered recently with the architects, contractors, and university officials to accept ceremonial keys to the houses and take a first look at Sorority Row along Aggie Road.

The new residents of Sorority Row moved in Sunday, Aug. 11. The public ribbon-cutting and grand opening will be on Homecoming Weekend, Saturday, Oct. 12, at 11 a.m.

While thanking all those involved for their vision and dedication to completion of the project, Dr. Tim Hudson, chancellor, reminded the audience, especially the sorority members, of what the project really means.

“Thomas Aquinas once said, 'There is nothing to be treasured on earth as much as friendship,' ” Dr. Hudson recalled. “So, even though we have beautiful buildings and we're here today to celebrate those beautiful buildings, I think about what's going to happen inside them and the friendships that you will make and that will sustain you and will connect you to your alma mater, Arkansas State."

Although the first campus chapter of a national Greek-letter sorority was founded at Arkansas State 65 years ago, none of the campus sororities had their own house. The university issued bonds to pay for site preparation and construction of the houses, which are leased to the various sororities.

The architectural firms who designed the project are WER of Little Rock and Brackett-Krennerich and Associates of Jonesboro. The contractor is Nabholz Construction Services, with offices in Jonesboro. Representatives from these firms attended the showcase event.

The five national sorority chapters that occupy the houses, the year founded at A-State, current student president, and their affiliated philanthropic focus are:

The chapters also enjoy support from volunteer alumnae advisers who work actively with the students.

Each house accommodates 20 students, who pay room and board fees just as they would do in a traditional residence hall. The fees, along with additional support for common spaces from the national chapters, pay off the construction bonds.

Room assignments are handled by the Office of Residence Life, just like other student residential facilities. A “Greek Village Assistant” employed by the university also will live in each house.

After the location for sorority row was planned along Aggie Road, representatives of the groups chose their specific lot in the order the various chapters were established on campus.

Random selection was used for choosing the exterior design and the brick for each house. The interior floor plans are uniform, but some options with interior finishes were available at an extra cost, paid by the sorority. Each house has approximately 8,050 square feet of living and meeting space.

Residents of the houses will park in a gate-controlled parking lot.