“We remember 1909 for our opening and 1967 for gaining university status,” Welch said. “Now we add 2017 to that list. Fifty years from now, we will be talking about this historic day and the difference it made for Arkansas State University.”

Classes began Labor Day, and the official 11th day enrollment is 220 students on the $100 million, state-of-the-art campus. The first American-style university campus in Mexico, which incorporates the A-State brand and Red Wolves logo, has 16 faculty — half of whom are from the United States — and 70 total employees.

Arkansas State University CQ, A.C., (ASUCQ), a private foundation led by Mexico businessman Ricardo González, invested more than $100 million to build 800,000 square feet of academic and residential buildings and recreational facilities in the first phase of the 370-acre campus and a 2,000-acre community development plan. State funds are not being used to build or operate the Mexico campus, and all of A-State’s startup costs are reimbursed with funds from private gifts.

The grand opening events included a state dinner with local business and government leaders hosted by Dominguez at the historic Palacio de Gobierno, a flag-raising ceremony with national anthems of both countries, a formal program, tours of the campus and interaction with students. In addition to the governors and Welch, speakers included A-State Chancellor Kelly Damphousse, A-State Vice Rector Brad Rawlins and A-State CQ General Director Pablo Anaya.

Welch recognized current members of the ASU Board of Trustees — Chairman Ron Rhodes of Cherokee Village, Dr. Tim Langford of Little Rock, Niel Crowson of Jonesboro, Stacy Crawford of Jonesboro and Price Gardner of Little Rock — and four former members — Howard Slinkard of Rogers, Mike Gibson of Heber Springs, Charles Luter of Paragould and Dan Pierce of Jonesboro — who approved and supported the campus partnership. The Board first authorized negotiations for the campus in December 2012.

“These individuals never wavered in their belief in the possibilities for this campus,” Welch said. “But the person who has had more faith than anybody is my friend Ricardo Gonzalez. Through a lot of negotiation and discussion, it was never adversarial. It was never about who was going to get more than the other. It was always about a partnership and about doing the right thing for the students. He stood before the board and said he would make us proud. Ricardo, today you have made us proud.”

Welch said that earlier in the day, he watched A-State Student Government Association President Haley Stotts of Little Rock visit with Samantha Morales Garcia of Mexico City. Rather than individuals with different backgrounds and nationalities, he said, “they were two young ladies pursuing their dreams. They want something better for themselves and their families. They realize that Arkansas State University, regardless of its location, can give them those dreams.”

Hutchinson said it was impressive to visit with the A-State CQ students and hear their excitement about the opportunities ahead.

“This campus means something that is very important to all of us — recognition of the global marketplace and the global nature of education for students in Mexico, students from the U.S. and also for students from Europe and Asia who will see opportunity at a global campus,” Hutchinson said. “This new venture means there is a link between economic development that we all desire through creation of jobs and innovation with education.

“This campus represents incredible entrepreneurship,” said Hutchinson, describing Gonzalez as a visionary for education and business. “I applaud the innovation of Arkansas State University. They do not simply come to the state of Arkansas and ask for more funds. They create their own future and their own innovation.”

A-State Chancellor Kelly Damphousse announced the creation of the Ricardo Gonzalez Award, which will become the equivalent of the prestigious R.E. Lee Wilson Award on the Jonesboro campus for the top graduating senior at A-State CQ.

“As we celebrate what we have accomplished here today, it is useful to also be reminded of all the challenges we overcame along the way,” Damphousse said. “It is no exaggeration to say that we would not be here without the incredible sacrifice and investment by Ricardo Gonzalez. Ricardo and so many others wanted to create a space where student from all walks of life can come to live together, to learn together and to grow together. And that is exactly what a university is.”

The grand opening events included moments of silence and other expressions of sympathy for victims of the 7.1-magnitude earthquake that struck the Mexico City region on Tuesday. The tremors were felt on the campus, which is 135 miles north of Mexico City, but did no damage.

Rawlins announced that A-State CQ would award scholarships to the 11 survivors rescued from a collapsed school building in Mexico City.

“Today as we gather to celebrate the culmination of several years of effort and faith to accomplish the dream of bringing an American-style campus to Mexico, our thoughts and hearts go to the people who have been affected by recent natural disasters in Mexico, including the earthquakes that have wreaked havoc and pain in Mexico City, Puebla, Oaxaca and other locations,” Rawlins said. “Our students have raised thousands of pesos and collected hundreds of pounds of food and equipment to send to Mexico City.  Our faculty have volunteered and worked to gather and pack food in Queretaro to be shipped to families in need in these devastated areas.”

Rawlins said A-State CQ “gives us an opportunity to educate, enhance and enrich a new generation of students in Mexico and in Arkansas.  I believe the path of education is gained by opening up doors to new experiences and opportunities. Thanks to everyone who has committed their passion, knowledge and will to bring this change, this dream, to reality.”

The initial degree programs cover three major subject areas:  business and communications, engineering and technology, and science.  Eight undergraduate degrees and two graduate degrees are available for A-State CQ students, and diplomas will be valid in both the United States and Mexico.

Construction on six buildings has been substantially completed, with four more expected to be complete by the end of the year. Four additional residence hall buildings will be added next year and a second academic building will be added in year three to support a projected 5,000 students in the first phase.

For more information about A-State CQ, visit AState.mx to learn about the degree programs offered, see the amenities of an American-style residential campus or begin the application process. 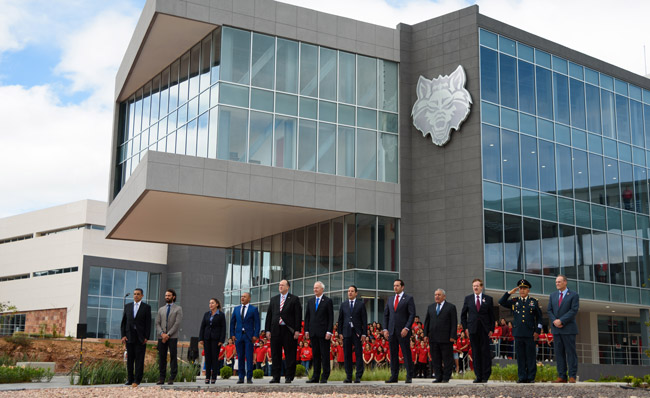