JONESBORO – Career military couple Doug and Debby Moore of Haymarket, Va., have made a gift commitment establishing a scholarship for cadets in the Department of Military Science at Arkansas State University.

Their gift will endow the Doug and Deb Moore Endowed ROTC Scholarship, which will be awarded each year to an outstanding student in the Department of Military Science.

Doug Moore, a native of Marked Tree, is a 1959 agriculture graduate at Arkansas State and winner of the Wilson Award, the highest award presented to a graduating student.  He attained the rank of colonel before retiring from the Army in 1989.  The A‑State Alumni Association named him Distinguished Alumnus in 1994.

"It is with great pleasure that Debby and I establish a scholarship for ROTC students," Moore stated, crediting Arkansas State for his early success. "Life has been good and after a rewarding military career of 30 years, I transitioned to health care management for another 25 years.  Now that we have both retired, Debby and I enjoy traveling around the world and hope that our small effort will assist other A-State students to do the same."

"The faculty, staff and cadets in the Military Science Department are very excited to receive this generous gift commitment from retired Col. Doug and Debby Moore," Mason commented.  "The cadets, especially appreciate what the scholarship means for their academic success, and receiving it from one of our most distinguished alumni is a bragging point.  Col. Moore is also member of our Hall of Heroes."

In 2017, Moore was inducted into the U.S. Army Cadet Command Hall of Fame as one of America’s most decorated Vietnam War-era soldiers, Mason added.  "We are genuinely proud of his accomplishments, and we very much appreciate his continued service and commitment to our cadets and our ROTC program."

Moore was commissioned as an officer and trained to become a medical evacuation helicopter pilot. During two tours in Vietnam, he flew 1,874 combat missions, evacuated 2,782 patients, and piloted the aircraft that recovered three American POWs released by the North Vietnamese government in a highly classified mission along the Cambodian border.

During one operation, his helicopter was hit 37 times while evacuating eight U.S. soldiers from a unit surrounded by the enemy. One round tore through his helmet, knocking him from the controls and sending the aircraft into a steep bank. Despite being wounded and unable to see out of one eye, he righted the helicopter and continued reporting the enemy locations to higher authorities.  For his actions, he won the nation’s second highest award for valor, the Distinguished Service Cross.

Between Vietnam tours, Col. Moore organized a unit in Japan that, during a two year period, flew more than 63,000 casualties from Yokota and Tachikawa Air Force Bases to five U.S. hospitals. Later, he commanded a battalion in the 82nd Airborne Division and a brigade at Ft. Lewis, Washington, where he was air mission commander for the massive rescue effort following the eruption of Mount St. Helens in May 1980. His last assignment was executive officer for the Army Surgeon General.

In 1968, at the age of 21, she became the youngest Special Services woman deployed to Vietnam.  She managed recreation centers where the enlisted soldiers could relax during breaks from combat operations, and served at four different basecamps during two years in Vietnam, surviving many rocket, mortar and ground attacks.

After her service in Vietnam, Moore spent three years in Korea where her Special Services programs won the highly coveted All-Army Bi-Centennial award.

For more information on giving to Arkansas State in support of its mission to education leaders, enhance intellectual growth, and enrich lives, one may visit the website, AState.edu/give, or call the Office of University Advancement, (870) 972-3940. 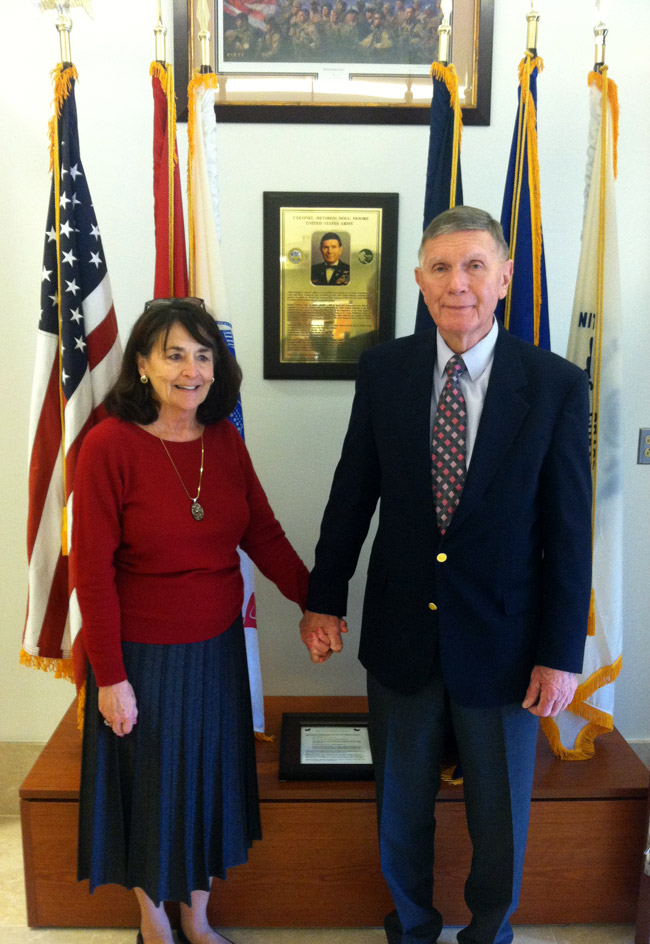