JONESBORO – Four individuals who have demonstrated commitment to achieving a more diverse environment at Arkansas State University were recognized during Convocation of Scholars as recipients of the 2017 Excellence in Diversity Awards.

The Excellence in Diversity Awards program is an annual recognition of individuals or academic units who have demonstrated the highest commitment to advancing diversity and inclusion on the A-State campus as well as the Jonesboro community over the past year, according to Dr. Maurice Gipson, assistant vice chancellor, Office of Diversity.

The recipients this year are:

Recipients of the Excellence in Diversity Award are selected by a university committee from among a slate of nominees.

Gipson was joined by A-State Chancellor Doug Whitlock to recognize the recipients and present each one with an engraved plaque during a university reception at Cooper Alumni Center.

Members of Circle of Trust who were recognized are Elizabeth Lewis, Diana Smith, Marlana Robinson and Maya Reed.

Gipson presented Chancellor Whitlock with the first Champion of Diversity Award in recognition of his contributions and commitment to the A-State diversity program.  Whitlock, who is president emeritus of Eastern Kentucky University, is serving as A-State's interim chancellor. 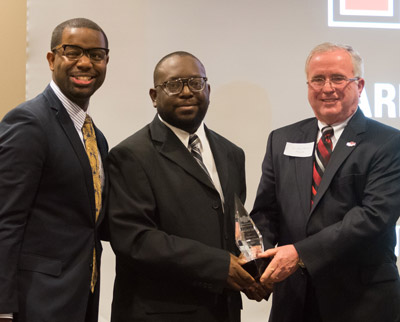