Department of Music to Present Choirs in Spring Concerts

JONESBORO – The choirs and vocal jazz ensembles at Arkansas State University will present their Spring Concerts over two evenings, Monday, April 28, and Tuesday, April 29.  Both concerts will be at 7:30 p.m. in Fowler Center, Riceland Hall. These concerts are free and open to the public.

The Chamber Singers and Concert Choir will share the Monday, April 28, performance.  These groups are directed by Dr. Dale Miller, who heads the choral music program at A-State.

The Men’s Choir and Women’s Choir, directed by adjunct instructor Cherie Robison Collins, and A-State Vox and Delta Vox groups, under the direction of assistant director of choral activities Dr. Kyle Chandler, will perform on Tuesday.  The groups also will be directed by Kane Bradley of Russellville, graduate choral conductor.

The singers also will present “Christus Vincit” by James MacMillan, an unaccompanied work directed by Bradley.  Concert Choir’s portion of the evening’s music will consist of newer works, two of which are written by student members of the choir, and another by Henkelmann.  “Go, Therefore” is a work published by Henkelmann and includes soprano and baritone soloists Cori Beasley and Daniel Harrelson with organ accompaniment by Henkelmann.  Bradley’s piece “De Profundis” is written for eight-part unaccompanied choir and has just been published by Pavane Publishing.

The third selection, “More of Thee,” is composed by A-State senior composition student Aaron Fisher who also wrote the lyrics.  Fisher’s work will feature soloists Emily Garren and Michelle Byrd. The final work of the evening is a spiritual by Rollo Dilworth titled “Roll, Jordan, Roll.”

Tuesday’s program begins with vocal jazz under the direction of Dr. Chandler.  The Delta Vox and A‑State Vox are two vocal jazz/contemporary a cappella ensembles that are a part of the A-State choir offerings.

These two ensembles will explore a variety of 20th and 21st century genres ranging from the swing style classics of the jazz era, mixed meter vocal gymnastics of present-day vocal jazz, and voice-only covers by contemporary artists such as Pentatonix! Members of these two select ensembles meet twice a week in collaborating rehearsals where students help drive artistic decisions of the pieces the ensembles perform and how they are interpreted.

Also appearing on the Tuesday program, the University Singers men’s and women’s choirs are led by a newcomer to the A-State faculty, Cherie Robison Collins.  The Women's Choir will perform the Mozart “Laudate Dominum” from “Vesperae Solennes De Confessore” with Crystal Aronson as the guest soloist.

They also will perform “See the Gipsies” by Zoltan Kodaly, “Heaven Unfolding,” accompanied by Elaine Bartee, guest cellist, and “Go Where I Send Thee!” arranged by Ivory and Caldwell.  Their final two selections will be the Moira Smiley version of “Bring me little water, Sylvy” and “A Dream Within a Dream” by Ruth Morris Gray.  Collaborative pianist for the Women’s Choir is Zixiao Ye.

The men’s pieces will include the Schumann “Hunting Songs,” Opus 137 accompanied by the A-State Horn Quartet, two barbershop selections directed by choir president John Phillians, “Thank You Dear Lord for Music” and “Sound Celebration” followed by an arrangement of “Be Thou My Vision” by Robert Hunter, directed by Bradley.

They will also perform a Crosby, Stills and Nash arrangement of “Find the Cost of Freedom,” and end with “Salmo 150” by Ernani Aguiar.  Collaborative pianist for the Men’s Choir is Trevor Robinson. 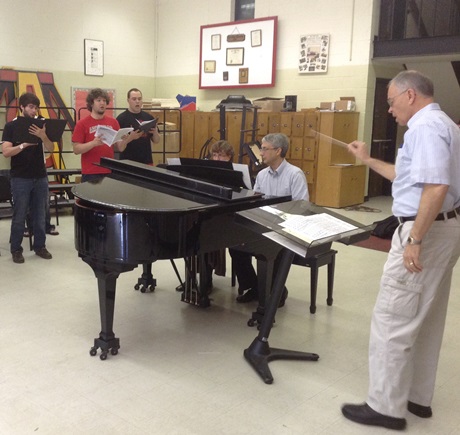