The documentary follows three drive-in movie theaters in Arkansas and one in Tennessee during the fall of 2020 at the height of the COVID-19 pandemic, and chronicles the history, resurgence, and future of each theater.

“The Creative Media Production Program is excited to debut this documentary at the very venues that worked with us to create it,” said Galen Perkins, instructor of creative media production. “Drive-In theaters have always fascinated me, and to track their revival during this time of great change was an exciting opportunity."

Perkins taught the special topics class consisting of several current and former CMP students who created the documentary during the fall 2020 term.

“The students bought in wholeheartedly, took ownership of the project, and ended up telling a fantastic story,” he added. “We’re extremely thankful to the theaters for working with us to tell their story, and for giving our students a new platform to showcase their work.”

Documentary viewing occurs at the Stone Drive-In in Mountain View, at 6:45 p.m. Friday and Saturday, Nov. 5-6, as part of a double feature with “It’s a Wonderful Life.” Admission is free.

For further information on “Revenge of the Drive-In Movie Theater,” one may contact RaLynnda March, ASU-TV station manager, (870) 972-3070 or Ralynnda.March@smail.AState.edu.  Follow ASU-TV on Facebook at facebook.com/asutvjonesboro for updates on the showings. 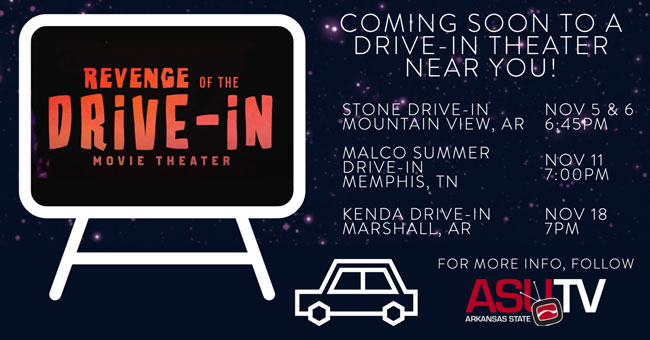