09/28/2015
JONESBORO – Leaders of Haag Brown Commercial Real Estate of Jonesboro—Greg Haag and Joshua Brown—will be honored as the Arkansas State University College of Business “2015 Business Executives of the Year” at its annual alumni chapter Homecoming breakfast, Saturday, Oct. 3, at 8:30 a.m. in the Hames Room at the Convocation Center, 217 Olympic Drive.
Tickets for the event are $15. For ticket and additional information, contact Linda Thomas by email at linda@AState.edu or by phone at (870) 972-3035.
“We are very pleased to announce our 2015 College of Business Executives of the Year are Greg Haag and Josh Brown,” said Dr. Shane Hunt, dean of the College of Business. “They co-own Haag Brown Commercial Real Estate and have been instrumental in the development of Jonesboro over the past decade.  Their work can be seen throughout the community.  The firm was a finalist for small business of the year for the entire state of Arkansas in both 2012 and 2013.”
Hunt also stated Haag and Brown are proud supporters of Arkansas State and recently funded a scholarship to help College of Business students.
Haag, who attended Arkansas State, is co-owner and principal broker of the business. He is one of three certified commercial investment members (CCIM) in Northeast Arkansas and has developed national retail in numerous states, including Arkansas. In addition to developing several retail projects in Jonesboro, he also serves on the 2030 committee to help shape the city’s economic growth over the next two decades.
Brown, the youngest CCIM in the state, is an executive broker with the firm. He has received many business awards, including “The New Influentials, 20 in Their 20's," "Arkansas Business' 40 under 40" and led Haag Brown Real Estate to be named a finalist for "Arkansas Business Small Business of the Year" in 2012 and 2013. He is a 2005 graduate of Arkansas State.
The firm has been the top commercial broker in sales volume in Northeast Arkansas for the last seven years. Some of its local projects include Starbucks, Red Lobster, Longhorn Steakhouse, Panera Bread, Cheddar's, Academy Sports, Five Guys and Men's Wearhouse.
“I am very appreciative for the terrific opportunities Greg and Josh have provided our A-State graduates to work for their company,” continued Hunt. “I am also especially grateful for the new scholarship they have funded to help our College of Business students reduce the cost of college now and in the future. I am excited we will have the chance to honor Greg and Josh and present this award at our homecoming breakfast.” 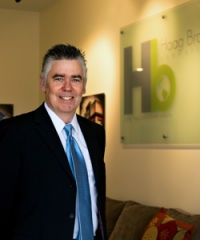 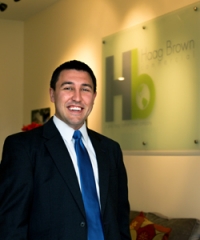