JONESBORO – The Dean B. Ellis Library clock tower will be scarlet this evening in memory of one of Arkansas State University’s most prominent alumni, U.S. Ambassador James W. Pardew.

Just yesterday, the ASU System Board of Trustees passed a resolution naming the Pardew Gallery in the Bradbury Art Museum in recognition of Pardew and his wife, Kathy Hoffman Pardew, for the gift of their art collection to the Arkansas State University System Foundation, Inc. Sadly, word of James Pardew’s passing came during the meeting.

The Pardews are natives of Jonesboro, and both attended Arkansas State. Modern art from Bulgaria, where James Pardew served as U.S. Ambassador from 2002-2005, is a central element of the collection.

“Ambassador Pardew believed 'societies around the world produce art to reflect their history, their culture and to interpret the life of their area and time,’” noted Garry Holstein, director of Bradbury Art Museum. “James and Kathy Hoffman Pardew’s art, now a permanent part of the Arkansas State University collection, encompasses a wide array of international and American art acquired during their life in the U.S. military and diplomatic service.”

In addition, the collection includes art from central Europe, Asia and Islamic countries where they lived, traveled and served.

“The art presents these cultures in a range of styles from abstract to figurative,” added Holstein, who worked with the couple as they made plans to donate the collection. “The Pardews expressed the hope that their gift will expand the international art and culture experience for A-State students, artists and the people of the region into the future.”

During the spring 2020 semester, the museum exhibits course in the Department of Art + Design created an online exhibit preview of the Pardews’ collection.

Chancellor Kelly Damphousse welcomed the couple to the A-State campus in February 2018 when Pardew made a presentation in the university’s Lecture-Concert Series following the publication of his book, Peacemakers:  American Leadership and the End of Genocide in the Balkans, published by the University Press of Kentucky.

“We want to honor Jim’s memory by lighting the tower scarlet this evening,” Damphousse said. “He and Kathy have given so much to their alma mater, sharing their experiences on the international stage, and representing their country so well.  We are very fortunate that Jim had decided to present us with numerous pieces from his unique art collection, and we still look forward to a showing of the works in the Pardew gallery in the next academic year.”

A graduate of Nettleton High School, Pardew earned a Bachelor of Science degree in journalism and a commission in the U.S. Army from A‑State in 1966.  He left the Army with the rank of colonel after 27 years as an intelligence officer.  The university recognized him as a Distinguished Alumnus in 1996, and the Department of Military Science later inducted him into its Hall of Heroes. 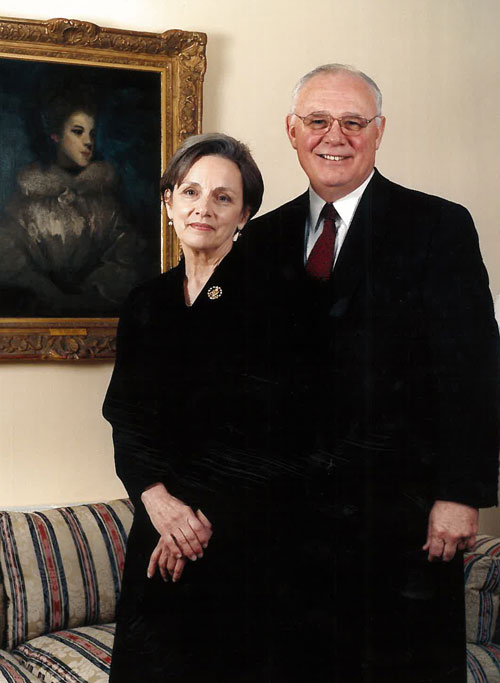