JONESBORO — The band Breaking Grass will perform a concert of bluegrass music Monday, Oct. 24, at 7 p.m. at the Collins Theatre, 120 West Emerson Street, in downtown Paragould.  The concert is part of the Bluegrass Monday concert series presented by KASU 91.9 FM. KASU will literally “pass the hat” to collect money to pay the group. The suggested donation is $5 per person.

Based in Mississippi, this five-piece bluegrass band released their debut CD in 2011.  The group is currently on tour in support of their third CD titled “Just As Strong,” and a fourth CD is set for release this winter on the Mountain Fever record label.  Breaking Grass has gained a reputation for their energetic live shows featuring bluegrass standards and their own original songs presented in a style that mixes traditional bluegrass sounds with contemporary compositions.

The band features Cody Farrar on lead vocals and guitar.  Farrar also writes many songs that are featured on the band’s CDs and in their concerts.  Tyler White is an award-winning fiddle player who plays in the group.  Jody Elmore plays banjo, Britt Sheffield plays bass and Zach Wooten plays mandolin for the band.

Bluegrass Monday concerts are held on the fourth Monday night of each month.  These concerts are presented with suport from Bibb Chiropractic, the Posey Peddler, Holiday Inn Express and Suites of Paragould, the Northeast Arkansas Bluegrass Association and KASU.KASU, 91.9 FM, is the 100,000-watt public broadcasting service of Arkansas State University in Jonesboro. 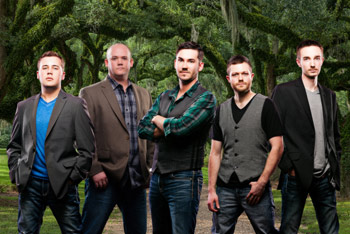