JONESBORO – Arkansas State University's Lecture-Concert Series will open for the 2014-15 season with a Constitution Day presentation by Dustin McDaniel, attorney general for the State of Arkansas.

McDaniel will speak to students and the public Thursday, Sept. 18, at 11 a.m. in the Carl R. Reng Student Union Auditorium, 101 N. Caraway Road.

Dr. Will McLean, chair of the Department of Political Science, talked about plans for this year's observance, which marks the anniversary of the signing of the U. S. Constitution.

"With each Constitution Day we host for both high school and college students, we try to emphasize the remarkable nature of our nation's founding document.  As an emphasis this year, we are focusing on how the Framers gave us a document malleable enough to take us from a largely agrarian society to the one we know today, with the Internet, social media and connectedness of thousands of cultures under the umbrella of one country."

He said surveys have shown that too few Americans, particularly young people, understand our Constitution and the civil rights and liberties Americans take for granted.

"These surveys are a wake-up call regarding what is being taught (or not taught) in our nation's schools and are indicators that too many of us have failed in one of our prime responsibilities – teaching Americans about the most important document in U.S. history: the Constitution," McLean continued.  "Constitution Day is an opportunity for students to expand their knowledge of the Constitution and its impact on our history and our lives."

McDaniel, the 55th attorney general of Arkansas, was elected in 2006 and reelected in 2010.  A native of Jonesboro, he served as a uniformed patrol officer with the Jonesboro Police Department, and practiced law at his family’s law practice, McDaniel and Wells. 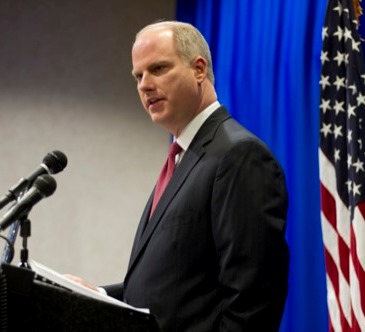