MOBILE, Ala. –The Arkansas State football team clinched its first bowl title since 1970 with a 17-13 victory over No. 25 Kent State in the GoDaddy.com Bowl at Ladd-Peebles Stadium on Sunday night.

In the process, the Red Wolves also claimed their first win over a ranked opponent since joining the FBS in 1992. A-State finishes the season with a 10-3 record and their second consecutive 10-win season.

“What a group of guys. I’m so blessed to be here and to have people around me like these coaches and players,” said ASU interim head coach John Thompson. “I’m so grateful to our staff. We have great people, and the whole country got to see that tonight. I’m so blessed to be a part of it. They’re really good football players, but they’ve got a ton of heart. That game was a good one. Our guys stepped up when they had to and made plays.”

ASU had 285 yards of total offense and senior quarterback Ryan Aplin was 21-of-30 with 213 yards and one touchdown in his final game as an ASU player. Aplin also took home the GoDaddy.com Bowl Player of the Game Award.

Sophomore linebacker Qushaun Lee, the game’s Defensive MVP, sealed the victory when he tackled Kent State quarterback Spencer Keith a fourth-down scramble that came up a couple of yards shy of a first down.

“I was really fired up,” said Lee. I kept saying that this was the last game and last chance for the seniors, so we tried to go out with a bang.”

The Red Wolves took a 14-7 lead with a 31-yard touchdown pass from Aplin to J.D. McKissic with 1:13 left in the first half. The touchdown proved to be the game-winning score as Kent State could only get within four points on two occasions before time expired.

McKissic finished the game with 11 receptions for 113 yards, earning the Offensive MVP award for his efforts. He tied the school record for catches in a postseason game, matching teammate Taylor Stockemer’s total in last year’s GoDaddy.com Bowl.

Kent State started off the scoring with a four-play, 66-yard drive capped off by a 16-yard run by Dri Archer with 12:02 left in the second quarter. Arkansas State responded with two unanswered scoring drives to take a 14-7 lead.

The first drive took nine plays and covered 60 yards, capped off by a 10-yard run by David Oku to tie the game. The Red Wolves then took the lead on the Aplin-to-McKissic touchdown. Kent State kicker Freddy Cortez kicked a 42-yard field goal with 19 seconds left to cut the A-State lead to 14-10 at halftime.

Kent State gained 350 yards of total offense but the ASU defense stepped up at key times. The Golden Flashes drove the length of the field on their opening possession, but Lee tipped a pass that senior linebacker Nathan Herrold intercepted to end the drive. Lee finished with 13 tackles, including one for a two-yard loss, and two pass break-ups.

“Our defense played well for us, and that gave us the motivation to go out and perform,” said Aplin of ASU’s defensive effort. “I think it’s probably the least amount of points we’ve put up all year, but guys were making plays in space, and the o-line was opening up holes. But the defense saves us tonight. They came out and played tremendous and got us the win.”

Freshman Rocky Hayes paced the A-State rushing game with 57 yards on eight carries. Junior David Oku gained 37 yards on 18 carries and had a touchdown. McKissic’s receiving total gave him 1,022 for the season, making him just the third ASU receiver to post a 1,000-yard receiving season. Freshman Darian Griswold and Senior Josh Jarboe each had three receptions.

“It was an amazing atmosphere, and we had a lot of motivation coming in because the players knew we were looking for the first school win against a top-25 team,” said Hayes. “We got comfortable with their defense and were able to pick up our tempo. When we’ve got our tempo going, we’re a tough team to stop.”

Senior Ryan Wilbourn was the Special Teams Player of the Game with six punts for 221 yards and had three kicks land inside the 20 yard-line.

The Red Wolves end the year on an eight-game winning streak, their second longest since 1986. A-State’s 10 wins tie the fourth most in school history, matching its total in 1951 and 2011. ASU posted double-figure wins in back-to-back seasons for the first time ever.

“Our guys have tremendous belief, and we’ve got a new coach, Bryan Harsin, coming in starting tomorrow,” Thompson added. “It will help us in every regard in terms of recruiting and national exposure. Everybody, including the administration, is a part of this thing. We’ve got a lot of momentum, and I’m thankful.” 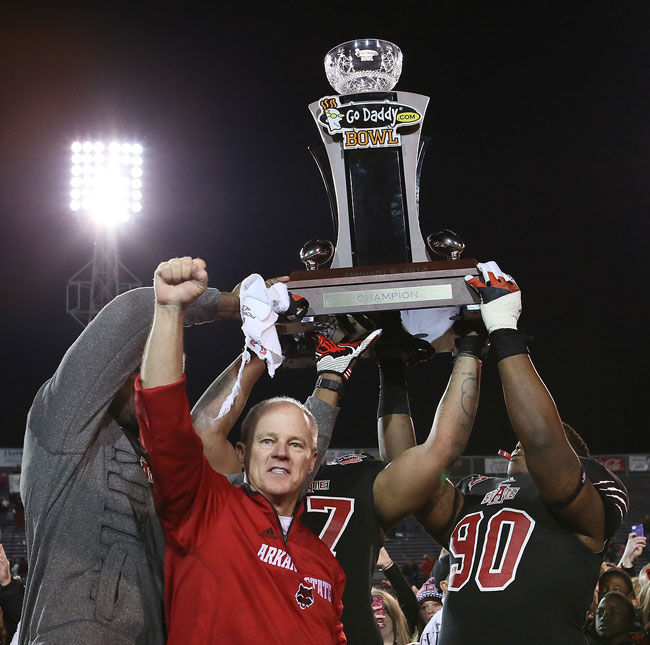 Interim Coach John Thompson celebrates with the team after the game. 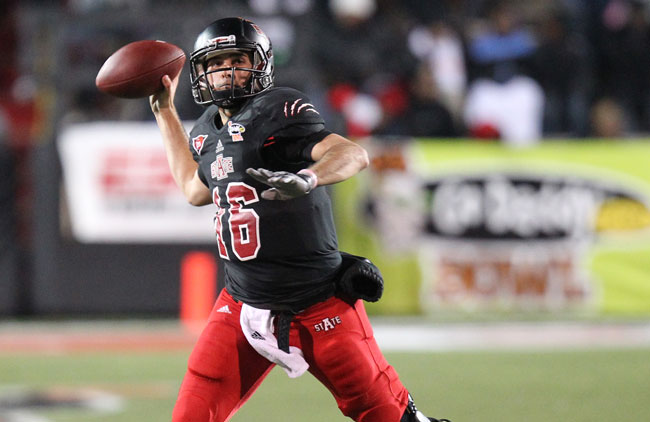 Ryan Aplin, Player of the Game 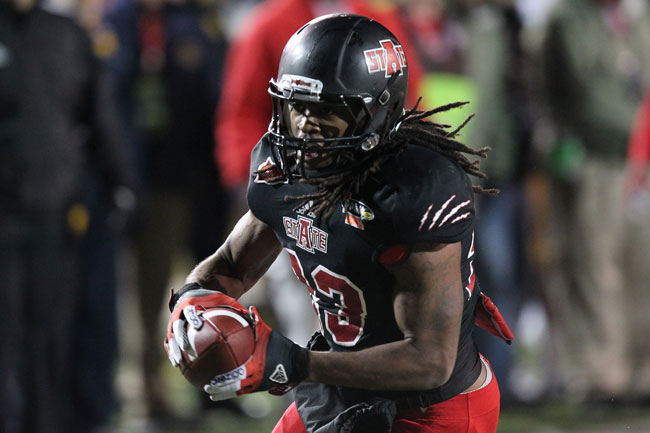 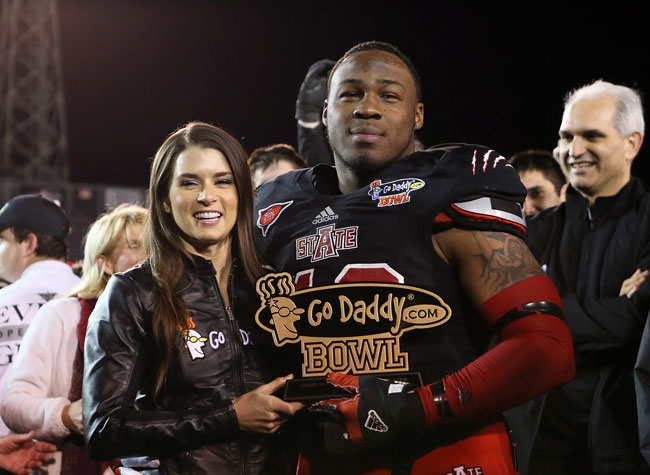