JONESBORO, Ark. — Arkansas State senior wide receiver Josh Jarboe has been named to the inaugural Raycom College Football All-Star Classic roster, and he will compete for the “Stripes” team in the game scheduled for Jan. 19 at 2 p.m. (CT) at the Cramton Bowl in Montgomery, Ala.

Jarboe finished his senior campaign with 50 receptions for 570 yards, both the second most on the team, and four touchdowns.  He averaged 11.4 yards per reception as well, posting a season-long reception of 63 yards against North Texas.  He tied the school record for receptions in a game with 13 against Oregon in the Red Wolves’ season opener and posted a season-high 101 receiving yards against Memphis.

The Decatur, Ga. native finished his two-year career at Arkansas State with 104 receptions for 1,300 yards and six touchdowns.  His career receptions total is the eighth most in school history and his yardage total ranks as the 12th most.  He ended his career with three 100-yard receiving games, including a career-high 162 yards against Memphis in 2011 that are the 11th most in ASU history for a single game.

Jarboe was a Second Team All-Sun Belt Conference selection in 2011 after recording 54 receptions for 730 yards and two touchdowns.  His receptions total as a junior ranks as the eighth most in school history and his 730 receiving yards is the 11th highest total.

Jarboe helped lead Arkansas State to back-to-back Sun Belt Conference championships and appearances in the GoDaddy.com Bowl, including a 17-13 win over then-ranked No. 25 Kent State in this year’s version of the postseason game.

The Raycom College Football All-Star Classic will be a week-long event that features elite college football seniors participating in NFL-formatted practices that are open to the public.  The game will be coached by former NFL head coaches Jim Bates and Dan Reeves and will be broadcast live on the CBS Sports Network. 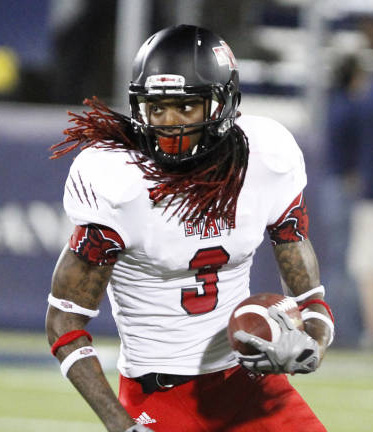