JONESBORO – Arkansas State University became the first college or university in the state to receive the League of American Bicyclists recognition as a Bicycle Friendly University, joining 100 visionary colleges and universities from across the country. 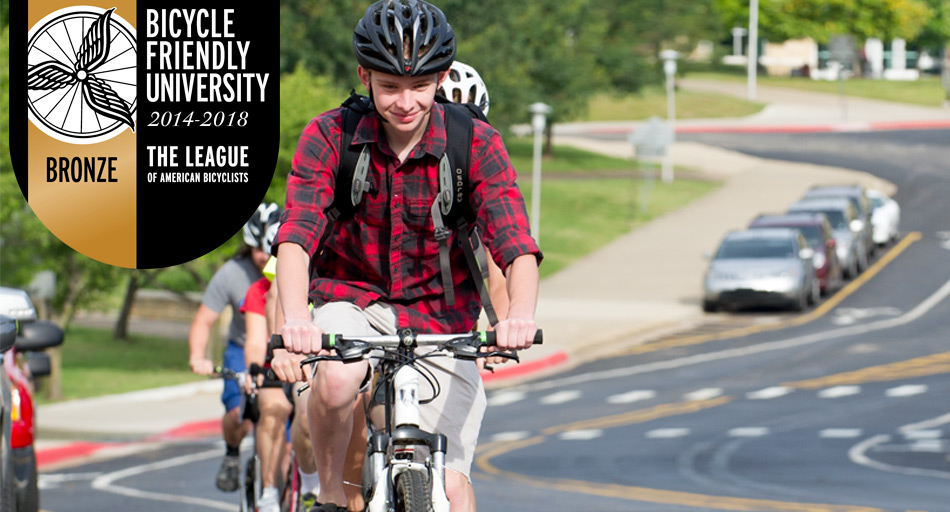 With the announcement of 33 new and renewing BFUs today in 20 states, Arkansas State joins a cutting-edge group of colleges and universities from across the United States, transforming their campuses and the communities around them.

“Campus leaders are recognizing the real-time and long-term impact that a culture of bicycling can create,” said Andy Clarke, president of the League of American Bicyclists. “We applaud this new round of colleges and universities for investing in a more sustainable future for the country and a healthier future for their staff, students and surrounding communities.”

Arkansas State’s recognition as the state’s first BFU coincides with a renewed effort to promote increased usage of bicycles on campus through the PAC Paths and associated programs.

“More and more, the students who choose to attend Arkansas State are seeking a destination university where they live and study within a diverse community,” Chancellor Tim Hudson said.  “Our campus PAC Path system is responding to the desires of millennial students to live on a more walkable and bike-friendly campus.  It has the added benefit encouraging healthy, active lifestyles for our students, faculty and staff.”

Formed in 1880 to advocate for issues related to cycling across the United States, the LAB promotes and ranks organizations under the Bicycle Friendly America program.

“This is great news for Arkansas State University and the City of Jonesboro and this is exactly in line with the future of our city,” Jonesboro Mayor Harold Perrin said.  “We want students to choose to come to A-State and then to choose to stay and work and live in Jonesboro after graduation. These are the things that will make that happen and the city congratulates A-State on this outstanding accomplishment.”

To earn status on the BFU list, Arkansas State had to meet all five phases of the Bicycle Friendly America program’s “5 E’s” – engineering, education, encouragement, enforcement, and evaluation and planning – and then excel in one area to earn Bronze level status.

The Pedestrian And Cyclist Paths represent part of the first phase of work at A-State to sustain a Bicycle Friendly University.  The PAC Paths are the result of a six-month-long project spanning the past two semesters to study how to create a campus-wide master plan for bicycle thruways.  A student-oriented event to promote the PAC Paths, the A-State Walk-N-Roll, was postponed until the spring 2014 semester because of recent inclement weather.

Arkansas State’s Heritage Sites in Mississippi County will host the sixth annual Tour duh Sunken Lands, scheduled for Saturday, Nov. 1.  The 50-mile riding event is a cultural tour that links together several museums and unique landmarks in the geographic region known as the Sunken Lands, including the Dyess Colony-Johnny Cash Boyhood Home, the Southern Tenant Farmers Museum and the Painted House in Lepanto.  A-State also supported local Jonesboro-based riding events, including the annual Ride for the Cure each summer and the new Ride for Your Life this past September.

The university is working with the city of Jonesboro on studies to link the campus PAC Paths system to downtown, as well as on pedestrian and cyclist studies along Johnson Avenue.  Arkansas State also participated in the statewide cycling plan meetings during the spring.