The A-State Rifle Team has been a club sport at the University since 1936. 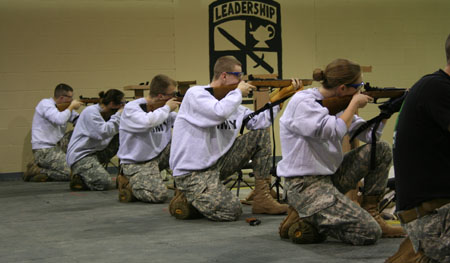 The Pershing Rifles Club is separate and distinct from the A-State Rifle Team. This club is open to any student enrolled in classes at Arkansas State University. This team competes in various rifle marksmanship competitions throughout the academic year. Each year there are newly elected officers who run the organization. The Pershing Rifles Club has access to "Sisler's Range" which is an indoor rifle range located in the A-State Military Science Building. "Sislers Range" is dedicated in memory of 1LT Ken Sisler: A-State's only Medal of Honor recipient. More information on 1LT Sisler can be found in the Hall of Heroes.

This team meets once per week throughout the year. Participants are required to attend PT regularly and maintain acceptable grades in their scheduled college courses. This team usually functions on its own but still falls under the Cadet Battalion Commander's authority.

Time spent in this organization may vary from week to week; however, most weeks the team meets once for practice and administrative purposes. The time per week will be determined by the Rifle Team Officers to best work with each team members college classes.

This extracurricular activity is open to any student enrolled in one of our Military Science courses. This team has the honor of presenting the National Colors in a variety of events throughout the academic year. It is not often that any American has the privilege to be involved with a time-honored tradition which many of our forefathers gave their lives for. When done well, there is nothing like having older veterans walk up to thank you, shake your hand and tell you what an outstanding job you did with a tear in their eye. Some events that the color guard has served honorably are A-State Football home games, Military Balls, Battalion dining in and dining out, various parades, and many more.

This team requires members with a sense of dedication to professionalism and to honor. Of all the extracurricular events, this one puts you in the spotlight as all eyes at any given event are upon you. See the SMI or Training NCO for more details of this time-honored team. Once on the team, you will wear the "Color Guard" tab and braid on your Class A Uniform. After 5 events, you will receive the Color Guard Ribbon for wear on your Army Service Uniform (ASU) as well.

Most of the events are done on the weekends and some during weeknights. The time commitment to practicing is not as much as one might think and a member can usually be trained in a matter of one afternoon session. 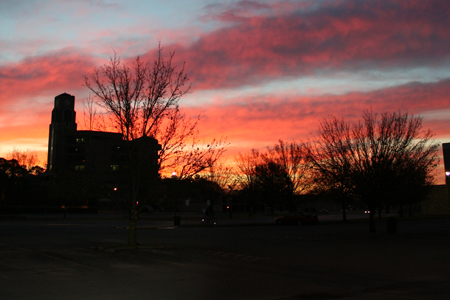 This organization is a club that is open to any student enrolled in one of our military science classes. Certain qualifications apply and are determined by the club's president. Scabbard and Blade is a national military honor society founded by five field officers at the University of Wisconsin in 1904-05. The program was started at A-State in January 2000. Its purpose is to provide a positive image of the ROTC program and the Army on the campus of Arkansas State University and in the surrounding community. Scabbard and Blade's distinctive insignias are the coveted "gray beret" with red and blue tab and the medallion, for Army Service Uniform.

The time for when this group meets will be determined by the organization's president.

The time required to participate in this club is determined by the individual cadet. There may be some weekend fundraisers and sporting events to attend. 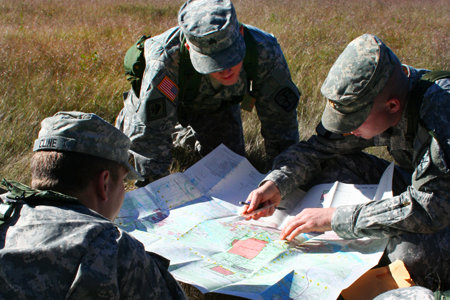 This club is open to any student enrolled in one of our military science classes. It honors 1LT George Kenton (Ken) Sisler commissioned as a Military Intelligence officer. He served a tour of duty with Special Forces in Vietnam, where he received our nation's highest award for valor: the Congressional Medal of Honor. He can be viewed in the Hall of Heroes' page on this website. Students that normally participate in this group are usually involved in preparation for the annual Ranger Challenge Event. This team competes on events that include a Physical Fitness Test, one-rope bridge, M16 marksmanship, obstacle course patrolling, day land navigation, and a 10 kilometer run with 35 pounds of combat gear.

This team meets 2-3 times weekly throughout the year. Participants are required to do PT 5 days a week and is mentored by an Assistant Professor of Military Science. They also participate in fund raisers, various athletic competitions and encourage other cadets to increase their APFT scores. This team usually functions on its own but still falls under the Cadet Battalion Commander's authority.

The time required to participate in this group will encompass some morning and late afternoon workouts. There are no weekend workouts unless determined by the group leader. Fundraising is a part of this team which includes paintball, marathons, and various sporting events.

The ASU ROTC Program and Rifle Team would like to publicly thank Cabela’s, the world’s foremost outfitter for their generous contribution to support continued growth and opportunities in the shooting sports!