About Dean B. Ellis 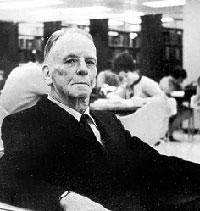 Mr. Ellis, who retired in 1965, two years after the new $1 million library was dedicated in his honor, joined the A-State staff in 1926.

At Vanderbilt he received the university's highest honor, the Founder's Medal, in 1916. He was also selected to Phi Beta Kappa and was a member of Alpha Tau Omega social fraternity.

He served for a year as an apprentice engineer for the American Telephone and Telegraph Co. in New York City. During World War I he was commissioned and served as an officer in the US Army air corps.

He rejoined the faculty at Arkansas State in 1943.

Baird V. Keister, associate professor emeritus of mathematics, was a close friend of Mr. Ellis. Both retired from ASU in the same year, 1965. "I knew Mr. Ellis as a valued friend and colleague during the last thirty years of his life," Mr. Keister said. "He had a great admiration for the dedicated student who gave his full time and energy to the mastery of the subject matter and skills of his educational program."

L.W. "Tex" Plunket, associate professor of journalism and a longtime friend of Mr. Ellis, said: "With the death of Dean B. Ellis, Arkansas State University has lost a long-time servant, friend, and supporter. Mr. Ellis devoted his life and much of his personal income to the development of ASU."

"As a teacher he was hard but patient with anyone who tried," Professor Plunket noted. "For a person not to learn and improve in his course, Mr. Ellis took it as a personal matter and a reflection on his own ability as a teacher."