Presented by the A-State Wildlife Program 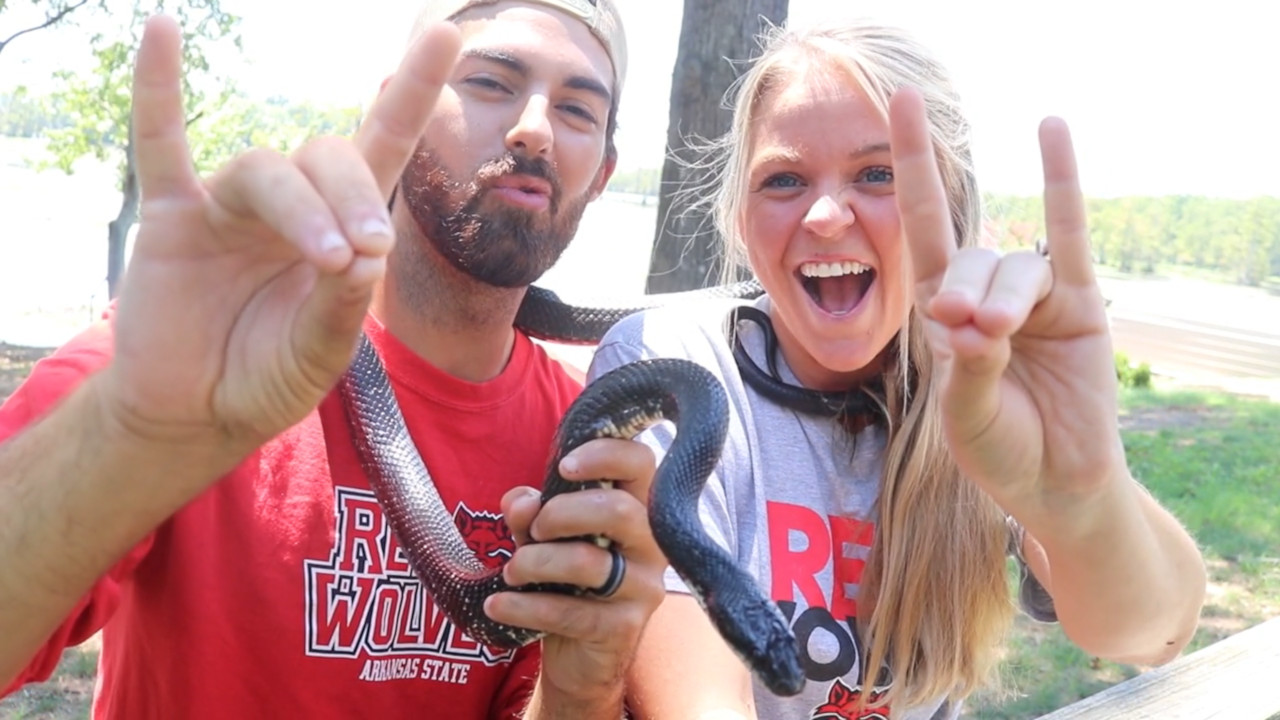 Jessica Harken recently graduated from A-State with an Interdisciplinary Studies degree, emphasizing Biology, Wildlife Conservation & Management, and Marine Biology. She and her husband, Cole Harken, an A-State Wildlife Conservation & Management student, have recently developed a large YouTube following as they post videos of their adventures in wildlife conservation in Arkansas. Follow these A-State students here on our College of Sciences & Mathematics site to learn more about our many important native species and how best to protect them.

Western rat snakes, also known as the black rat snake and the chicken snake, occur statewide in Arkansas, and are arguably one of the most common big snake species found in our state. Adults are large, muscular and usually black in color with some lighter ventral checkerboard coloration. Though not always welcome when found around our barns, chicken houses, brush and junk piles, Western rat snakes are harmless to humans, and in fact may tame after handling.

Usually the earliest snake species to emerge from winter hibernation, they mate in spring and lay their eggs in the summer months, while they actively forage. Though their name suggests rodents as their main source of prey, western rat snakes eat a variety of warm-blooded mammals or birds slow and small enough to catch, as well as bird eggs. They are also opportunistic feeders, and as constrictors they will quickly throw coils around their prey to before finally consuming it.

This may sound frightening, and though they may not be considered welcome visitors, they are an absolutely necessary species to help maintain rodent control, including controlling the rodents’ potentially harmful pests and parasites. Killing a rat snake on your property may result in a spike in your local rodent population, so please consider the benefits the snake brings to the area, and let it go on its way, as it poses no threat to you.

Here in Arkansas, you may have seen Green Tree Frogs clinging to windows on well-lit buildings by their large, sticky toe pads. They’re just looking for insects that are attracted to the bright lights, especially after a rain.

Known by the scientific name Hyla cinerea, they are among the most common frog species living throughout Arkansas, except in the state’s northwestern counties. They like areas with lots of ground cover and aquatic vegetation, and often rest on the undersides of leaves or in moist shady places during the day. Only 1¼ to 2½ inches long, this attractive frog is bright green to green/gray to yellow/green, with a light creamy colored belly, often with colored stripes that run laterally down its side. Green Tree Frogs breed throughout spring and summer, and you may hear them calling to each other around lakes, swamps and flooded agricultural fields. During development, tadpoles progress from eggs laid in shallow water, and they mature into frogs within two months.

Join Jessica and Cole as they describe one of their favorite frog species – and you may find yourself keeping a lookout for one of these cute guys the next time you’re near a night light when the weather is warm.

Among Arkansas’ most beautiful creatures is the monarch butterfly.  The bright colors of these insects attract us, but signal toxic chemicals within that may sicken their predators.  These butterflies have a unique life history, and rely on native plants that are found in many gardens and fields in Arkansas.  The only insects that migrate to warmer climates during the colder months, the population of monarch butterflies is unfortunately declining due to degradation of their habitats, pesticide use, and climate change.  Learn from Jessica and Cole how to help make a difference in the life of monarch butterflies and maintain their populations to be enjoyed by Arkansans for years to come.

Creature Features
Contact the College of Sciences and Mathematics