JONESBORO -- KASU, the Arkansas Folklife Program, and Arkansas State University's Department of English and Philosophy will wrap up this year's Delta Symposium XIX with a special concert by Pierce Pettis, according to Dr. Greg Hansen, symposium co-chair.

The event will be held Saturday, May 18, at the Arts @ 311 during two shows in the music venue at 311 S. Church Street in Jonesboro. The first set begins at 7:30 p.m., and the evening concludes with a second show at 9 p.m. Admission is free, but seating will be limited.

Pierce Pettis is a well-respected singer and songwriter, known particularly for his musical commentary on the human experience. Based from his northern Alabama home, he travels and performs widely as a recording artist for Compass Records.

Pettis began singing, playing guitar, and writing songs as a child, and he became an important contributor to New York's "Fast Folk" movement of the 1980s.

After releasing original songs on his own recordings, he was signed by Windham Hill's High Street Records. His first three releases led to wide recognition, and he has received numerous awards for his compositions, including a 1999 Country Music Award from ASCAP for "You Move Me," a song he co‑wrote with Gordon Kennedy and was recorded by Garth Brooks.

His most recent recording for Compass, “That Kind of Love,” was widely acclaimed by music critics.

Among his many honors is a prestigious fellowship from the Virginia Center for the Creative Arts. He used this opportunity to craft songs that appear on his release "State of Grace" and other recent recordings.

Pettis has been a staff songwriter at Polygram and Universal Music, and he has won the New Folk competition for songwriting at the Kerrville Folk Festival. "Sing Out" magazine writes that "Pettis doesn't write songs … he writes literature." His lyrics focus on a wide range of topics, including rural life in the American South, memory and nostalgia, explorations of religious faith, and even historical musings on figures like Leonardo DaVinci and Machiavelli.

Recently he has contributed his songs to a collaboration with Kate Campbell and Tom Kimmel in his performances with their folk super group known as the "New Agrarians."

Pettis is also highly revered as a singer and guitarist. His rich and full voice is supported by a subtle yet virtuosic finger-picked guitar technique that blends with his rich melodies. He has been featured on National Public Radio’s “Morning Edition,” VH-1, and the Nashville Network.

Additional information about the performer is available on his website, http://www.piercepettis.com/. 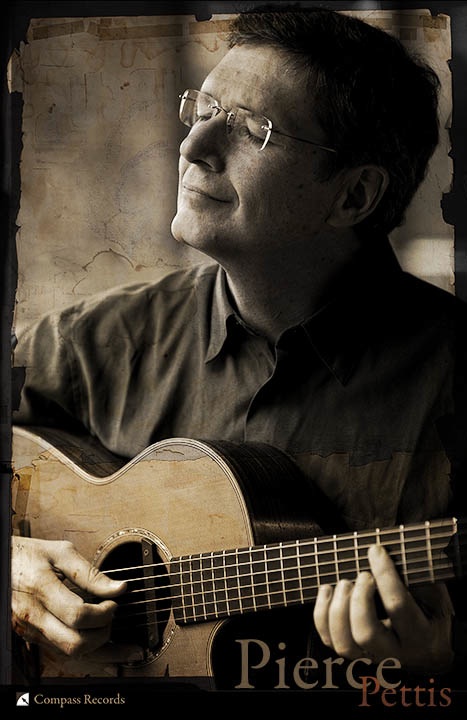