As a five-year-old, Kenny Rains knew he wanted to be an inventor. Throughout his early education, he spent time "tinkering," learning how to take ideas from his imagination to reality. When Rains was in high school he learned about researchers at Wake Forest University who were using a 3D printer to "print" kidneys and heart valves that may someday be used as transplants. That inspired him to pursue a future in biomedical engineering and he began saving money to purchase his own 3D printers.

As an electrical engineering student at A-State, Rains' adviser and interim dean of the college Paul Mixon said, "Kenny was the first student I ever knew who had his own 3D printers at home. It’s kind of a new technology. I knew what a 3D printer was, but I can say that he taught me just as much about 3D printing as I taught him about some of his engineering courses."

Rains met a fellow engineering student, Alex Cossey, who was paralyzed from the shoulders down. Cossey could move his arms and wrists but not his fingers. Rains adapted designs for an artificial hand to meet Cossey's unique needs and used his 3D printers to produce a movable prosthetic. When Cossey moves his wrist up, the prosthetic fingers close, allowing him to grasp objects he couldn't previously hold.

Other innovations Rains created with his 3D printer have led to a pending patent for a cell phone solar charger accessory and $35,000 in awards for his team, Agricultural Innovations, at the recent Donald W. Reynolds Governor’s Cup collegiate business plan competition. Rains’ innovative spirit has impacted his college. "Kenny educated me on the potential value of 3D printers, particularly for the educational environment and for preparing students for careers in manufacturing," said Mixon. "The College of Engineering now has one and we are setting up a process for students to be able to use the machine in their personal time to pursue their own ideas as Kenny did. A lot of high school students are very excited to come here and use our 3D printing lab."

Rains did what few other students do and finished his Bachelor of Science in engineering degree in just four years. He did that while also playing tight end for the A-State football team, and has continued his education at A-State by pursuing a master’s degree in engineering management. Rains sought employment with Bad Boy Mowers, a lawn mower manufacturing company headquartered in Batesville, Arkansas. The company recognized Rains' talent and created a position for him in January 2015. "I use 3D printing to clean up a lot of manufacturing processes," said Rains. "I print models for machine components, which we then test for interference before sending it to be manufactured."

He recently printed a gasoline tank cover that required 750,000 lines of computer code and 29 hours to print. Making the model in-house cost about $50 but may have cost up to $7,000 if they outsourced the 3D printing. With the first model, the engineering team discovered interferences that required modification, so Rains made the changes and printed another model. Before integrating 3D printers into the manufacturing process, a mold would be cut at a cost of more than $30,000 and a few months' time. If there were interferences with the component, a new mold would be required. The $12,000 industrial grade 3D printer has paid for itself in the production of just one component.

Every day Rains applies the critical thinking and problem-solving skills that he learned at A-State through his experiences with both engineering and football. Learning from different professors and playing football for five different head coaches in five years, Rains said he learned there are multiple ways to solve one problem.

"At my workplace, no one tells me how to solve problems, they just throw it at me and say 'solve it.' If I see something that can be improved upon, I will work toward a solution." In the future, Rains plans to start his own business and continue solving real-world problems through engineering research and development. "I am constantly creating new things and want to take each one as far as it can go. I want to see how far I can ride each idea." 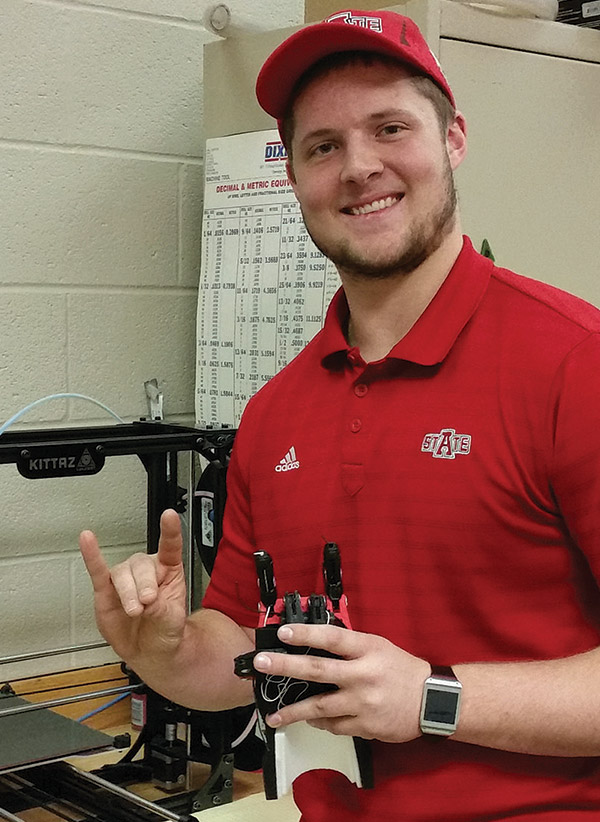 "I’ve always wanted to be an engineer and an inventor. I just happened to discover that I’m also good at football."