“Arkansas State has demonstrated a commitment to hazardous weather preparedness,” Jim Belles, meteorologist in charge at the National Weather Service’s Memphis Forecast Office.  “This commitment will benefit the university staff, the Weather Service, and most importantly, the students and faculty of A-State.  Whenever hazardous weather threatens, the Arkansas State community can take comfort in knowing that their local officials are as prepared as possible.”

To achieve the StormReady designation, Arkansas State’s severe weather preparedness plans were reviewed and scored against six criteria including how the university receives and monitors weather, the ways it distributes that information, and overall weather planning.

“Arkansas State met, and in many cases, exceeded the criteria,” Woodall said in his remarks.   “However, their drills and advance planning activities for large events were particularly impressive.”

“As you all know, I’ve spent some time at a university with close ties to the Weather Service and I have a keen appreciation of what severe weather means to a university,” Damphousse said.  “I’ve been told about how weather has impacted A-State in the past, and I’m pleased that our administration, faculty and staff have put an emphasis on weather safety.”

The StormReady program began in the late 1990s and spread nationwide as local communities sought to improve their local severe weather preparedness.  It is a cooperative effort between the National Weather Service and emergency managers at the state and local level.  The program focuses on aspects of a community’s hazardous weather operations, including:  the presence of an Emergency Operations Center; a 24-hour contact for warning information; adequate means of receiving NWS warnings and statements; sufficient local warning systems; efficient communications with the NWS Office in Memphis; and public education and outreach efforts.

“StormReady is a community-level recognition, but it is up to all of us to ensure we are personally as prepared as we can be,” Woodall reminded the crowd.

Arkansas State shares the triple with Ole Miss, as Oxford and Lafayette County are also StormReady. 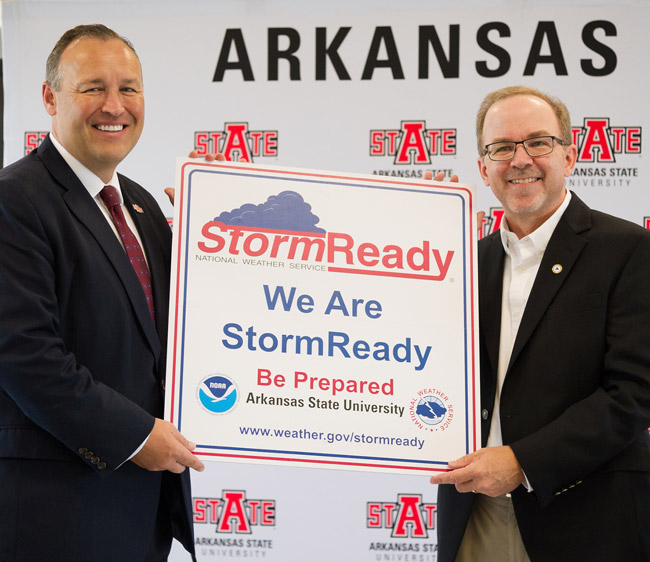