The confirmed keynote speaker will be Ethel Tompkins, the first African-American to graduate from Hoxie Public Schools.

“The events in Hoxie represent a pivotal point in American history.  On the cusp of the Brown vs. Board decision of 1954, the Hoxie School District attempted to integrate the schools,” said DuShun Scarbrough, executive director of the Arkansas Martin Luther King, Jr. Commission in Little Rock.  “A number of brave students who had previously attended a one-room colored school from the first grade through eighth integrated the schools and forever changed the history of public education.

“Truly, Dr. King was the most notable figure in the Civil Rights movement and knew changes needed to be made, but he could not accomplish them on his own.  Therefore, it is also important for us to recognize and remember other trailblazers who made an impact.

The event will include workshops and breakout sessions in addition to a community vendor showcase.

“We will incorporate a computer coding class and workshops on community involvement,” said Commissioner Janis Wady of Marianna.  “At these summits, we try to instill a sense of community pride and community service.”

The summit is free and open to the public; however confirmation of attendance is strongly suggested.  The Arkansas MLK, Jr. Commission works directly with youth and others by encouraging them to embrace racial and cultural diversity through collaboration with the commission’s area partners in education.  These summits are a way to help the youth achieve Dr. King’s dream of understanding and acceptance of nonviolence and human equality through building common unity among all Arkansans.

“These summits are important and history is important.  It is important for today’s generation of youth to know things were not always like they are today and the opportunities they enjoy and take for granted, someone had to break the ground to make it possible,” Andy Montgomery of Batesville, a commissioner for the Arkansas Martin Luther King, Jr. Commission said.

The first battle to implement the Brown vs. Board of Education school desegregation decision was fought in Hoxie. The situation in Hoxie proved to be just a foreshadowing for what was to come two years later in nearby Little Rock two years later.  Hoxie sparked the first deployment of federal agents in support of integration and the first court order overturning state segregation laws. Hoxie was the first school district to fully integrate K – 12 students and the first "challenged" school to integrate in 1955.

With the help of the community and legal counsel, the school district prevailed over the opposition they faced. Hoxie serves as a benchmark and precedent for civil rights in providing equal opportunity to education. In 2015, the Lawrence County Chamber of Commerce celebrated the 60th anniversary of the integration of Hoxie schools and they have dedicated a community museum to honor the bravery and resilience of those citizens who played a significant role.

The Lawrence County Chamber of Commerce and the Hoxie Integration were presented with the 2016 Arkansas Martin Luther King, Jr. Commission Humanities Award for their contributions to American and Arkansas history.

“The Arkansas Martin Luther King, Jr. Commission is pleased to bring this caliber of programming to Jonesboro,” noted Commissioner Elizabeth Johnson of Marianna. “As a state agency, we make every effort to serve youth in every corner of the state through programming that not only teaches youth about the importance of Dr. King, but about community service, history and topics popular with them such as computer coding and bullying.”

The AMLKC, along with the Arkansas Department of Human Services (DHS), developed the nonviolence summit program to urge youth ages 10-18 to become involved in community positive leadership roles. The mission of the summit is to educate the youth population throughout Arkansas about professional development, history of Arkansas, leadership and crime prevention.

The commission was created in 1993 as part of the Martin Luther king Federal Holiday Commission and by executive order of former governor Bill Clinton. The mission of the Arkansas Martin Luther King, Jr. Commission is to promote and preserve the life and legacy of Dr. King throughout the State of Arkansas, while promoting the principles of nonviolence and equality among all citizens.

For more information about the summit, contact DuShun Scarbrough, executive director, the Arkansas Martin Luther King, Jr. Commission, by phone at (501) 683-1300, through email at dushun.scarbrough@arkansas.gov. 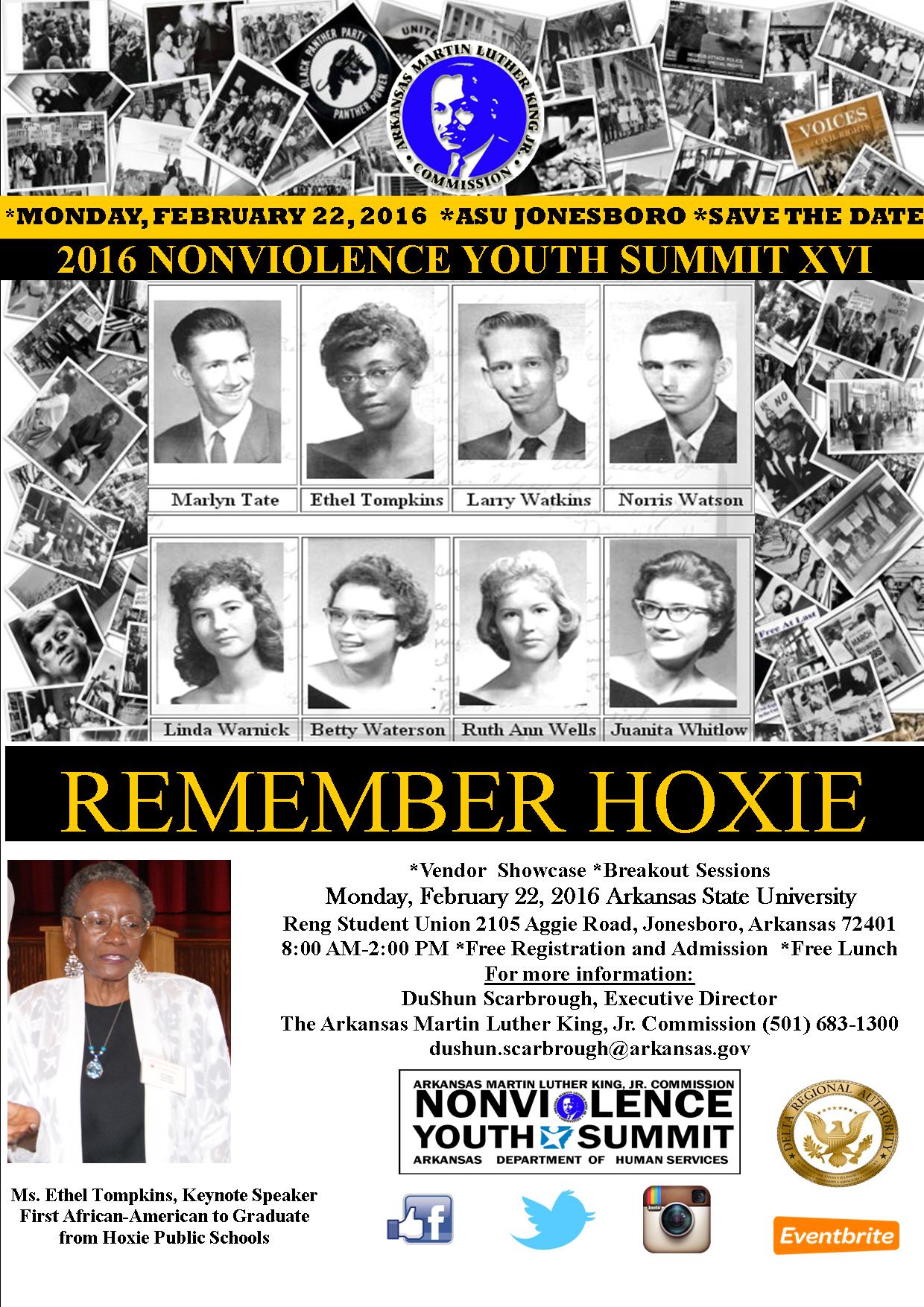