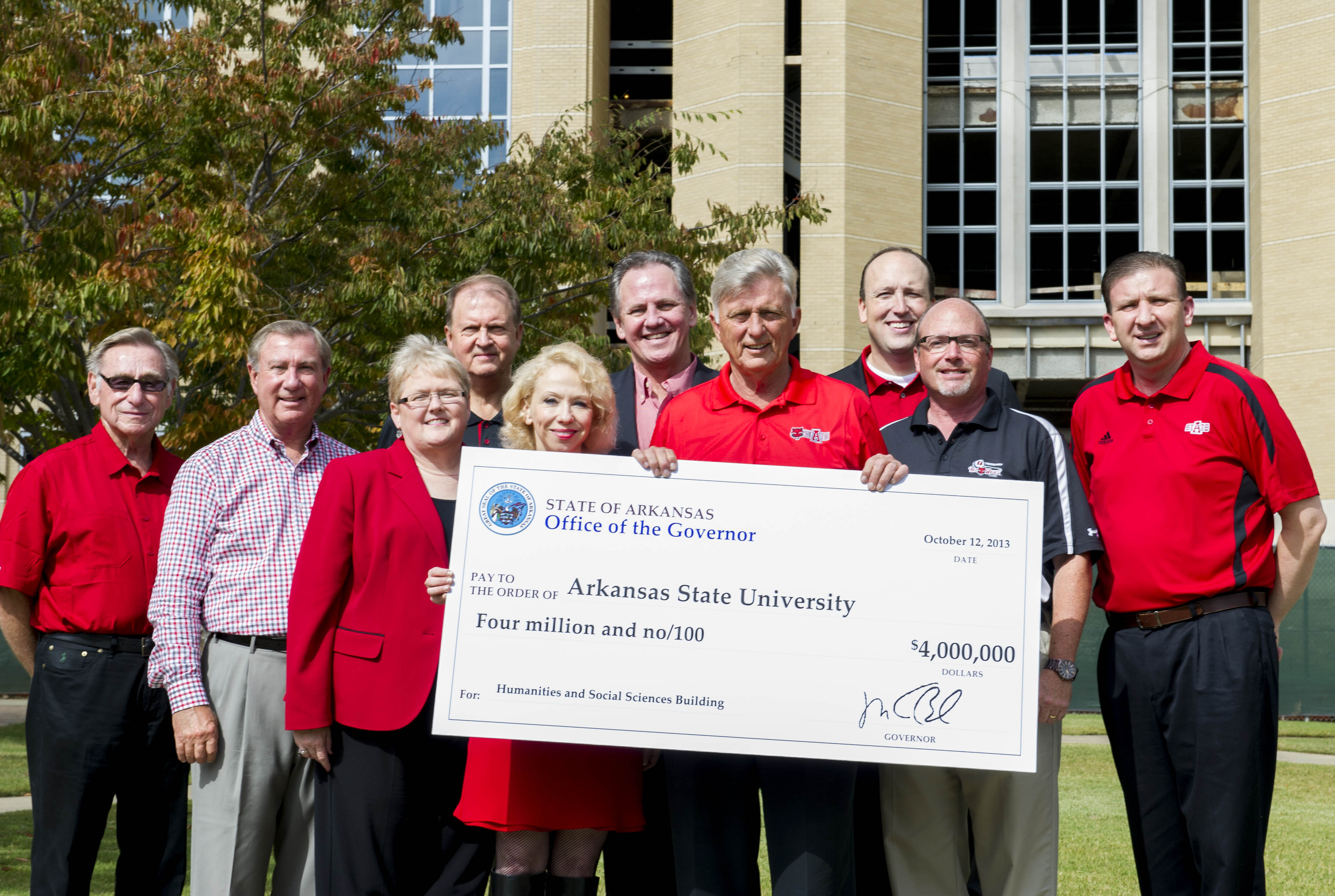 JONESBORO – Arkansas Governor Mike Beebe today announced he has released an additional $4 million from the state General Improvement Fund toward construction of the Humanities and Social Sciences Building in the center of the Arkansas State University campus.

While the annual Homecoming festivities are underway today, Gov. Beebe’s visit to the construction site also was something of a homecoming for him personally as an A-State graduate in political science, one of the programs to be housed in the new building.

Gov. Beebe commended members of the Arkansas General Assembly for allocating the GIF funds to the project, which is highly important to the university.

“This, together with the bond issue that the Board of Trustees has authorized, will now complete this building,” Gov. Beebe said.  As a graduate of the college that will have a new home, he added, “We’re extremely proud, it’s a fitting location, right in the middle of this concourse.”

Saying the project has been a collective effort of so many people, he said, “We’re here today to say thank you to all the members of the General Assembly, past and current, the Board and administration of ASU, and everybody that’s been involved.”  He cited current and former legislators who were present, State Rep. Harold Copenhaver of Jonesboro and former Speaker of the House Shane Broadway, now director of the state Department of Higher Education, for their support.

According to Welch, president of the ASU System, Gov. Beebe and various area legislators through the years have been very supportive of funding for the facility, previously providing more than $17 million in state General Improvement Funds toward design and construction.

Late last month, the university Board of Trustees approved a $27.7 million bond issue to finish financing construction of the Humanities and Social Sciences Building, along with construction of a multipurpose student activities center.

Calling the event a momentous occasion for Arkansas State, Hudson said, “We’re in the process of changing the landscape of this institution, thanks to the wonderful help from our legislators and our governor, Mike Beebe.”

The 120,000-square-foot Humanities and Social Sciences Building is a $36 million project.  As the new location for the College of Humanities and Social Sciences, it will house the academic departments of Criminology, Sociology and Geography; English and Philosophy; History; Political Science; and World Languages and Cultures.  Four of the five are now in Wilson Hall; the fifth is in the International Student Center.

“The Humanities and Social Sciences are at the heart of a broad-based liberal arts education,” according to Dr. Umansky.  “How fitting that this beautiful new building sits at the center of our campus, here to welcome students to both the immediate and the enduring benefits of learning in a university setting. We are deeply grateful to all who have had the faith and persistence to make the completion of this building a reality.”

The building will feature state-of-the-art classrooms, computer labs, faculty offices, departmental suites and conference rooms.  Completion is anticipated for the fall semester of 2015.

Construction of a new building for the academic functions now housed in Wilson Hall was identified more than a decade ago as a high priority for the future of the university.