The ceremony culminated years of exhaustive work to provide a safe, efficient and effective connection under the Marion Berry Parkway.

“When Chuck Welch asked me to step in as the interim chancellor at Arkansas State, he told me he only cared about the completion of two projects,” A-State Chancellor Doug Whitlock said.  “Restoring a culture of shared governance and the completion of the FreyWay.”

The economic impact of the opening of the FreyWay is unprecedented according to members of the community present at the event.

“While the attraction of the next Frito Lay or Nestle plant will be a tremendous financial boost, we cannot overlook the staggering, dare we say, transformative, impact of the FreyWay,” President of the Jonesboro Regional Chamber Mark Young said.  “The Quality of Life for Jonesboro is immeasurably improved with the FreyWay.”

Both the outgoing and incoming presidents of the Student Government Association praised the move.

“Our administration made several accomplishments this year, ranging from flex dollars at games to the food truck to Red Wolf Talks, but the FreyWay tops the list,” 2016-17 president Hannah Aldridge said.

“We can already notch a major achievement for the Stotts-Horton administration,” 2017-18 president Haley Stotts added.  “The FreyWay paves the way for the downtown shuttle that many students will have the opportunity to use.”

Other students could barely curb their enthusiasm for the project.

“Before the FreyWay, I would wonder, as I drove around the full commuter parking lot at 9:20 for a 9:30 class, if the lot at Military Science was also full,” Ramona Harrison said.  “Now I can drive right to it to see that it’s full.”

The joyous celebration marked the second time a road on the western side of A-State was opened to solve the connectivity logjam presented by the Marion Berry Parkway’s railroad overpass.  After completion of the overpass severed the direct exits toward Jonesboro’s vibrant downtown area, the more than 1,500 faculty and staff were forced to drive University Loop to the east, then north to then travel west. 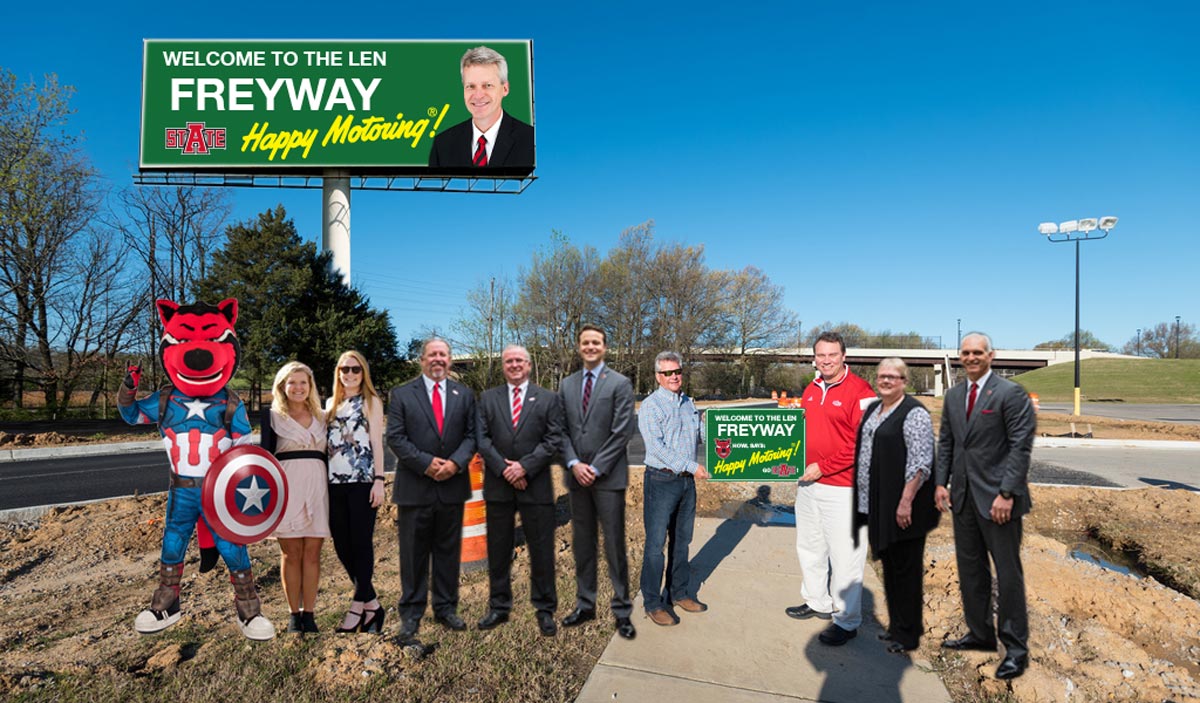 Members of the local and campus community gather to dedicate the FreyWay.

The first road, known simply by a grateful campus community as Frey Road, was a temporary patch.  While it lasted far beyond its life expectancy, and provided sanctuary to the faculty, students and staff wishing to escape A-State to the west, it was closed during 2016, then removed, leaving not only a blockage, but returning a dark shadow onto the collective soul of the institution.

Now the permanent solution was heralded by officials

“I can barely conceal my excitement for how this will carry folks on campus.  Why the amount of time saved by faculty, staff and students who can now leave campus via Aggie Road to the west is the equivalent of hundreds of thousands of dollars in productivity,” said Rick Owens, member of the Delta Regional Economic Impact Alliance.  “If we consider that the more than 1,500 faculty and staff in a year may have experienced 10 minutes of delay each time as they were coming and going from their jobs, back and forth for lunch, and to and fro for errands, the FreyWay might return 10 million minutes over the course of a year to these people.  That’s not even considering the impact on thousands of students.”

“While I was able to ponder the potential impact of hairy roots on the creation of artificial human capillaries while stuck in traffic leaving the Arkansas Biosciences Institute, that is time saved that can now be applied to the advance the boundaries of human knowledge,” one campus researcher said.

Not everyone was pleased with the completion of the year-long project.

Robert Jones, the previous leader of the Extreme Short Course Shallow Water Swim Team, expressed his anger over the FreyWay.

“I believe the funding devoted to our new facility was utilized to complete the FreyWay,” Jones said.

University officials countered that while the proposed ESCSW Sea Wolves made a splash this time last year, the fact that the NCAA did not select the sport for full inclusion into its Emerging Sports Program (ESP) had more to do with the team’s demise.

A planned “asphalt swim” utilizing the special ESCSW techniques on the FreyWay as a protest did not materialize.