A-State pitcher Hannah Craig got things started on the mound, allowing two runs on six hits over four innings. The junior from Trumann also led the team at the plate going three-for-three. Freshman Lexi Betts took over the pitching duties and threw three innings, giving up one run on three hits. The defense behind Craig and Betts was perfect with no errors in the game.

“The second game was a pitching duel between Taylor Tiffany and Lyon’s pitching staff,” said Keith Hinson, A-State head coach. “Taylor won the duel, throwing all seven innings and pitching a shut out.”

A-State found hits were hard to come by, tallying only four for the game by Tiffany, Marissa Spence, Autumn Goines and Elizabeth Shellenbarger, all with one hit apiece. The only score in the game came in the fourth inning with two outs when the Red Wolves got three of the four hits of the game.

Spence, a freshman from Tyler, Texas, singled on a hard hit up the middle, followed by a ball hit to left field by Shellenbarger, a freshman from Beebe. The lone run of the game was delivered by Goines that scored Spence, making the score 1-0.

Lyon College tried to come back in the top of the fifth. The lead-off batter reached base on a walk, then advanced to second on a passed ball. Lyon achieved its only hit of the game to left field. With two outs, the runner at second base attempted to tie the game, but was denied by the strong arm of Goines from left field making a throw to Elizabeth Flaming at home plate for the tag to finish the inning.

Arkansas State, which has experienced several cancellations due to inclement weather conditions, played a doubleheader with the National Park Nighthawks in Hot Springs Sunday afternoon. The teams split the pair of games with the Red Wolves dropping the first, 11-7, and clinching the second game, 12-10.

In game one, junior Courtney Foreman started on the mound for Arkansas State and put in three innings of work, allowing four hits, five runs, with two strikeouts. Betts and Tiffany worked together to finish out pitching duties. The Red Wolves collected 10 hits with sophomore Jaleyia Perry, Goines, Betts and Emily Wilson proving to be strong forces at the plate. In the fourth inning, Wilson went for the long ball and tallied a three-run homerun.

In game two, Spence had two homeruns, driving in four total runs. In all, A-State collected 14 hits with 12 runs. Tiffany started on the mound allowing five runs with two strikeouts. Craig came in to pitch in the second inning and proved to be a force.

The doubleheader with Washington University, originally scheduled for Saturday, March 7, has been cancelled. The Red Wolves will host Three Rivers College, Sunday, March 8. The games get underway at 5:30 p.m. and 7 p.m. 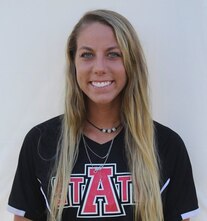 Taylor Tiffany — pitched a shut out and recorded 13 strikeouts vs. Lyon College.