JONESBORO – Arkansas State University has developed and launched its first iOS mobile app, A-State SmartCampus, to serve as a first stop for information for the entire Arkansas State community.

A-State SmartCampus brings into one application key student information, community news and updates, and navigation for the Arkansas State campus in Jonesboro.

“Our students and alumni live in a mobile environment and creating for them a way to stay connected with both courses and campus life was the goal of our development team,” Chancellor Tim Hudson said.

The A-State SmartCampus is available for download from Apple’s iTunes App Store for free.  The application works with Apple devices running the iOS 6.0 or higher operating system.  There are also links from the university’s main website, AState.edu, to download the program.

Students can log in for course information, grades, holds and other information from A-State’s student records system.  SmartCampus utilizes the university’s online map to allow for searching for buildings or facilities on campus.   Another important feature for students is a full directory of faculty and staff phone numbers which allow for one-touch dialing.

“Including the ability for students to navigate campus, manage their classes and locate and contact their instructors were important factors we wanted to include to enhance our iPad initiative,” Provost Lynita Cooksey said.  “We look forward to working with our on-campus developers to include more and more features in upcoming versions.”

The news from Arkansas State, including campus news from the university, KASU and the Jonesboro community, along with Red Wolves athletics stories and scores are featured in the app.  The app has the social media and videos from the university and athletic department official feeds, and also includes streaming radio from on-campus NPR member KASU as well as the student-run Red Wolf Radio.

The official university campus calendars for university and athletic events are available in the app, and can export to the individual user’s personal calendars.

In addition, a version for the Android operating system is under development for later release.

Created by A-State faculty, staff and students, SmartCampus is a collaboration of the Center for Digital Initiatives, the Department of Information and Technology Services, and Office of Marketing and Communications.

The lead developers were all A-State employees or students.  Roshan Gautam from CDI was the team leader with Terell Pigram of ITS serving as the development leader.  Josh Parrish and Harshit Gupta of ITS also served as developers on the project.  The programming team worked with the project management group of Dr. Andrew Sustich from the Office of Research and Technology Transfer, director of CDI Dr. Alyson Gill, director of ITS Henry Torres, and executive director of marketing and communications Dr. Bill Smith. 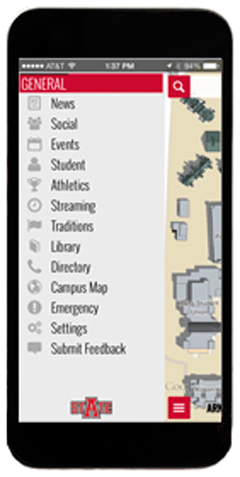