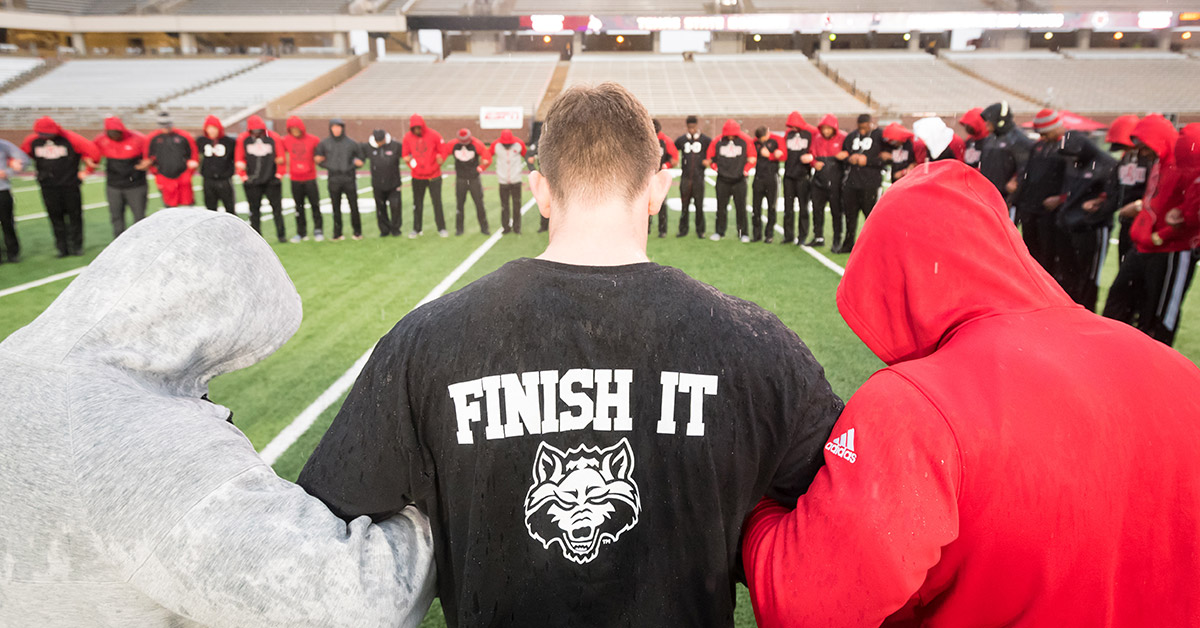 “Five championships in six years is just a testament to all the people that have held this thing together, even before we got here,” A-State head coach Blake Anderson said. “It really speaks to how this group has pulled together because half of this senior class is ours and the other half was already here and that can be really hard. You have to give them credit on how they came together and became family and went through a lot of tough stuff.”

Texas State led the Red Wolves 14-13 with 8:55 to go in the third quarter, but a Cody Brown interception put the A-State offense in a prime scoring opportunity and J.D. Houston converted a 27-yard field goal to start a run of 23 unanswered points.

Brown’s interception came after the A-State offense began the second half with back-to-back 3-and-out offensive possessions and after Texas State took the lead with a 10-play, 73 yard drive to open the half.

The Red Wolves’ defense forced the Bobcats’ to punt on their next offensive series following the field goal, and the offensive went on a 9-play, 74-yard drive that was capped with a 7-yard pass from Justice Hansen to Dijon Paschal to push the advantage to 22-14.

Hansen finished the game 13-for-21 for 179 yards and two touchdowns after also tossing a 14-yard score to Blake Mack with 9:49 to go in the game. Warren Wand, who had 199 yards of all-purpose yardage, also had a touchdown after scoring on a 26-yard scamper in the second quarter. Wand finished with 135 rushing yards on 23 carries and also had 64 receiving yards.

A-State scored the game’s first touchdown on a 6-yard run by Johnston White and then took a 13-0 lead on Wand’s touchdown run, but the Bobcats answered with 14 straight points to take the lead before answering with 23 unanswered points to secure the win.

The Arkansas State defense finished the night with 8.5 sacks and 19 tackles for loss and was led by Chris Odom who had five tackles, three sacks and four tackles for loss. The defense also forced Texas State into two turnovers and held them to just 237 yards of total offense.

The Arkansas State Athletics Department announced Sunday that its Sun Belt Conference champion football team has accepted an official invitation to play in the 2016 AutoNation Cure Bowl presented by Florida Hospital on Dec. 17 at 4:30 p.m. (CT), when it will face American Athletic Conference member UCF.