Wait, what––cheek swabbing? Yes, September is Blood Cancer Awareness Month, and for the last few years, Arkansas State University alumnus Colin Hall ’99 has made it his life’s mission to swab the cheeks of as many people as possible. He’s searching for possible donor matches for people who are fighting blood cancer and in a short period of time he’s met with some satisfying successes.

It started in 2011, when one of Hall’s close friends, Leslie Harris, was diagnosed with leukemia––five hours before she was to give birth to her son.

“The doctors initially gave her six months to a year to live without a bone marrow transplant,” Hall said. “That was unacceptable to me; here she was with this new baby coming. I knew I had to learn as much as I could as quickly as I could.”

Hall immersed himself in learning about leukemia and other blood cancers, as well as bone marrow transplants––who can donate, how it’s done and the associated costs to the donor. He learned expectant mothers can donate umbilical cord blood, which is otherwise disposed of as medical waste.

He organized a 5K run, not only to raise awareness, but also to raise money for the Cord Blood Bank of Arkansas at the University of Arkansas for Medical Sciences. Hall said this year’s run on September 25 over Little Rock’s Big Dam Bridge will help raise awareness and money, but they also will have a swabbing booth where people can swab their cheeks for bone marrow matches.

As an A-State student, alumnus Jared Burks ‘14 was volunteering at a bone marrow drive on campus when he decided to get his cheek swabbed, too.

“The odds of finding a match are extremely slim,” said Burks, who is now in medical school at UAMS. “I was surprised when I got the call in August 2013 to confirm a young person needed help. For privacy reasons, I can only say the person was very young and still had a whole life left to live.”

“It is important to swab because there are so few people on the registry,” Hall said. “A five-minute swab could be the determining factor in saving someone’s life; I can think of no greater gift.”

Hall said those who can’t make the Little Rock run but wish to become registered donors can start at the website https://www.deletebloodcancer.org/en/register.  Leslie Harris is in remission; to date she has inspired more than 8,000 individuals to get swabbed, with 167 matches and 15 collections. Burks is one of those collections; he is an enthusiastic advocate for swabbing and donating.

“Just do it,” Burks said. “Donating isn’t painful and everything is paid for/reimbursed. The person who needs you needs you in a way that is unimaginable. My blood and white blood cells are coursing through that person’s body, keeping them alive. It’s not every day an opportunity of this magnitude comes around in which you can actually make such an impact on someone’s life.

“Time is the only finite thing we have in life. Some people’s time gets cut too short, but some people have a slim chance to live; that’s what donating is about.” 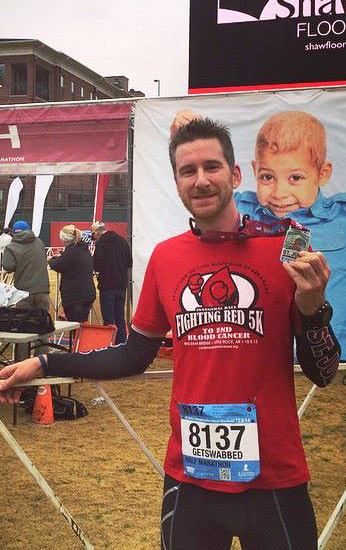