His work on developing crops ecologically adapted to the American landscapes coincides with the theme of this spring's Delta Symposium XIX: “Cultivating the Delta.” As with all symposium events, Dr. Jackson’s presentation is free and open to the public.

“It's a great honor to our university and our community that the noted scholar and writer Wes Jackson will be presenting at this year's Delta Symposium,” said Mike Luster, director of the Arkansas Folklife Program at ASU. “Combining his background as a geneticist, his work to develop an ecologically important perennial agriculture, and his skill as a writer, he teaches us all how to approach becoming native to our places.”

Dr. Jackson is founder and president of The Land Institute, a non-profit research, education and policy organization dedicated to sustainable agriculture based in Salina, Kan. Jackson was born in 1936 on a farm near Topeka. After attending Kansas Wesleyan (B.A. biology, 1958), he studied botany (M.A., University of Kansas, 1960) and genetics (Ph.D., North Carolina State University, 1967).

He was a professor of biology at Kansas Wesleyan and later established the environmental studies department at California State University, Sacramento, where he became a tenured full professor. He resigned that position in 1976 and returned to Kansas to found The Land Institute.

Dr. Jackson's writings include both papers and books. His most recent works, “Nature as Measure” (2011) and “Consulting the Genius of the Place: An Ecological Approach to a New Agriculture” (2010), were both published by Counterpoint Press. “The Virtues of Ignorance: Complexity, Sustainability, and the Limits of Knowledge” (2008) and “Rooted in the Land: Essays on Community and Place” (1996), were co-edited with William Vitek. “Becoming Native to This Place,” 1994, sketches his vision for the resettlement of America's rural communities.

“Altars of Unhewn Stone” appeared in 1987 and “Meeting the Expectations of the Land,” edited with Wendell Berry and Bruce Colman, was published in 1984. “New Roots for Agriculture,” 1980, outlines the basis for the agricultural research at The Land Institute.

The work of The Land Institute has been featured extensively in the popular media including The Atlantic Monthly, Audubon, National Geographic, Time Magazine, The MacNeil-Lehrer News Hour, and National Public Radio's "All Things Considered." Life magazine named Jackson as one of 18 individuals they predict will be among the 100 "important Americans of the 20th century." In the November 2005 issue, Smithsonian named him one of "35 Who Made a Difference," and in March 2009 he was included in Rolling Stone's "100 Agents of Change."

Jackson is a recipient of the Pew Conservation Scholars award, a MacArthur Fellowship, Right Livelihood Award (known in Stockholm as the "Alternative Nobel Prize," and the Louis Bromfield Award. He has received four honorary doctoral degrees. In 2007 he received the University of Kansas Distinguished Service Award and was one of the 2011 recipients of the University of Kansas College of Liberal Arts & Sciences Distinguished Alumnus Award.

In addition to lecturing nationwide and abroad, Jackson is involved outside The Land Institute with a variety of projects including being a Post Carbon Institute Fellow, a Councillor with the World Future Council, and a member of the Green Lands Blue Waters Steering Committee.

Books by Wes Jackson as well as those by other featured guests participating in the Delta Symposium will be available immediately prior to and following the presentation. This year’s Delta Symposium XIX: Cultivating the Delta continues through Saturday, April 20. The full Symposium schedule is available online. 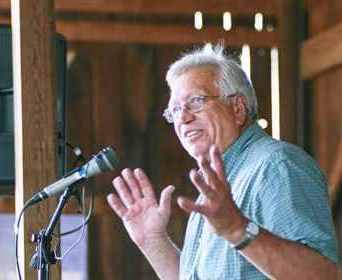