Lecture of the Year 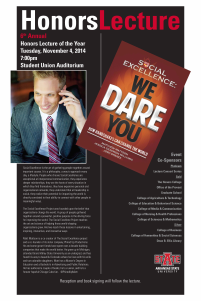 The Social Excellence Project was founded upon the belief that organizations change the world. A group of people gathered together around a powerful, positive purpose is the driving force for improving the world. Our education and consulting firm teaches the art and science of helping those world-shaping organizations grow. And we teach those lessons in entertaining, inspiring, interactive, and innovative ways.

SOCIAL EXCELLENCE [n]: A state of perpetual generosity, curiosity, positivity, and openness to limitless possibility. A desire to intentionally connect with others. The ability to engage in deep, meaningful conversation. Acting in a responsible and respectable manner, with high expectations of others. Being authentic and living everyday with integrity as the best version of yourself. Being confident and vulnerable. Being fun and compassionate. Being open, kind and bold. The deepest level of societal participation and contribution.

Social Excellence is the art of gathering people together around important causes. It is a philosophy, a way to approach every day, a lifestyle. People who choose Social Excellence are exceptional at interpersonal communication, they experience deeper relationships, they are the hosts of every situation in which they find themselves, they have expansive personal and organizational networks, they understand that all leadership is social, they realize their potential for impacting the world is directly correlated to their ability to connect with other people in meaningful ways.

 More confident leaders due to a clarification of priorities.

 Heightened social awareness due to a re-definition of the word “social.”

 Enhanced public relations due to wider and deeper relationship networks within the community.

SOCIAL EXCELLENCE: WE DARE YOU; HOW HANDSHAKES CAN CHANGE THE WORLD

This book, overflowing with real-life examples of Social Excellence in action. It is a book that dares the reader to engage with the people and society around them. The authors describe how to build masterful social skills, share stories of people who have changed the world through interpersonal connection, and challenge readers to push their social comfort zones to the max through Social Dares.

The book is written to inspire community leaders, organizational members, non-profit volunteers, religious congregations, business leaders, political advocates, high-performing students, and anyone who is seeking a way to truly matter in the world.

“An inspiring guide to finding a richer life full of meaning – and changing the world. Relationships create revolutions, and these authors are starting a bold movement,” ~Keith Ferrazzi, bestselling author and networking guru. 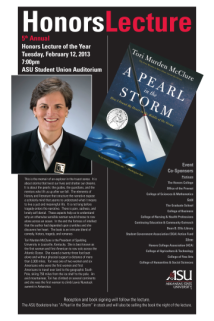 A Pearl in the Storm is the memoir of an explorer in the truest sense. It is about storms that twist our lives and shatter our dreams. It is about the pearls: the guides, the guardians, and the mentors who lift us up after we fall. The elements of history and literature that structure the narrative expose a scholarly mind that yearns to understand what it means to live a just and meaningful life. It is not long before tragedy enters the narrative. There is pain, sadness, and lonely self-denial. These aspects help us to understand why an otherwise sensible woman would choose to row alone across an ocean. In the end the fortress of intellect that the author had depended upon crumbles and she discovers her heart. The book is an intricate blend of comedy, history, tragedy, and romance.

Tori Murden McClure is the President of Spalding University in Louisville, Kentucky. She is best known as the first woman and first American to row solo across the Atlantic Ocean. She rowed a twenty-three foot boat alone and without physical support a distance of more than 3,300 miles. Tori was one of two women and six Americans who were the first women and first Americans to travel over land to the geographic South Pole, skiing 750 miles from the ice shelf to the pole. An avid mountaineer, Tori has climbed on several continents and she was the first woman to climb Lewis Nunatak summit in Antarctica. 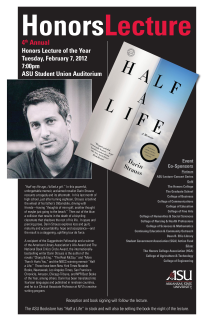 “Half my life ago, I killed a girl.” In this powerful, unforgettable memoir, acclaimed novelist Darin Strauss recounts a tragedy and its aftermath. In his last month of high school, just after turning eighteen, Strauss is behind the wheel of his father's Oldsmobile, driving with friends—having thoughts of mini-golf, another thought of maybe just going to the beach.” Then out of the blue: a collision that results in the death of a bicycling classmate that shadows the rest of his life. In spare and piercing prose, Darin Strauss explores loss and guilt, maturity and accountability, hope and acceptance—and the result is a staggering, uplifting tour de force.

A recipient of the Guggenheim Fellowship and a winner of the American Library Association's Alix Award and The National Book Critics Circle Award, the internationally bestselling writer Darin Strauss is the author of the novels “Chang & Eng,” “The Real McCoy,” and “More Than It Hurts You,” and the NBCC-winning memoir “Half a Life.” These have been New York Times Notable Books, Newsweek, Los Angeles Times, San Francisco Chronicle, Amazon, Chicago Tribune, and NPR Best Books of the Year, among others. Darin has been translated into fourteen languages and published in nineteen countries, and he is a Clinical Associate Professor at NYU's creative writing program. 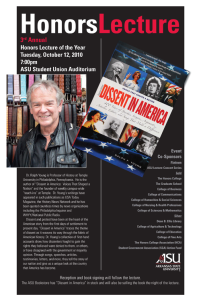 Professor and author Dr. Ralph Young presented the third annual Honors Lecture of the Year. Dr. Ralph Young is associate professor of History at Temple University in Philadelphia, Penn. He is the author of “Dissent in America: The Voices That Shaped a Nation” and the founder of weekly campus-wide Dissent in America teach-ins at Temple. Dr. Young’s teach-ins are designed to stimulate debate on different points of view. According to Young, the ultimate goal of the teach-ins is to deepen students' understanding of the historical background of recent events. This creativity earned Young a 2009 Provost’s Award for Innovative Teaching in General Education at Temple, and Young developed the “Dissent in America” course, which examines dissent as a central theme of American history. He compiled songs, speeches, articles, testimonies, letters, and more from dissenters to create “Dissent in America” as the textbook for his course. Dissent and protest have been at the heart of the American story from the first days of settlement to the present day.

“Dissent in America” traces the theme of dissent as it weaves its way through the fabric of American history. Dr. Young’s collection of primary historical documents (songs, speeches, articles, testimonies, letters, and more) interspersed with his own explanatory essays, is arranged chronologically in ten parts, from Pre-Revolutionary Roots (1607-1760) through Contemporary Dissent (1975-present). Noteworthy dissenters like Samuel Adams, Frederick Douglass, Susan B. Anthony, and Bob Dylan keep company with lesser-known dissenters like Cherokee Chief John Ross and Sarah Grimké. Each document is introduced by placing it in its historical context, and thought-provoking questions are provided to help students focus as they read the text. 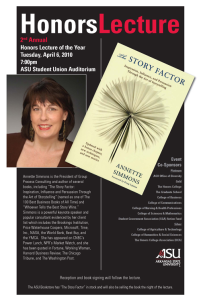 For the second Honors Lecture of the Year, The Honors College hosted Annette Simmons who is the President of Group Process Consulting and author of several books, including “The Story Factor: Inspiration, Influence and Persuasion Through the Art of Storytelling” (named as one of The 100 Best Business Books of All Time) and “Whoever Tells the Best Story Wins.” Simmons is a powerful keynote speaker and popular consultant evidenced by her client list which includes the Brookings Institution, Price Waterhouse Coopers, Microsoft, Time, Inc., NASA, the World Bank, Best Buy, and the YMCA. She has appeared on CNBC’s Power Lunch, NPR’s Market Watch, and she has been quoted in Fortune, Working Woman, Harvard Business Review, The Chicago Tribune, and The Washington Post. For more information about Annette Simmons, please visit http://groupprocessconsulting.com/.

This lecture capped a yearlong endeavor to promote “The Power of Story” which was our 2009-2010 theme for the NEW Honors Living-Learning Community that opened in August 2009. 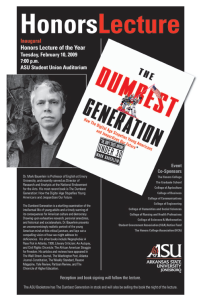 Dr. Mark Bauerlein is a professor of English at Emory University. His newest book, "The Dumbest Generation: How the Digital Age Stupefies Young Americans and Jeopardizes Our Future;Or, Don’t Trust Anyone Under 30," was released in May 2008 and has been heralded by CNN, CBS News, the Los Angeles Times, The New York Times, Newsweek, and The Wall Street Journal. Drawing upon exhaustive research, detailed portraits, and historical and social analysis, "The Dumbest Generation" argues that “the digital age stupefies young Americans” and lays out a compelling vision for how society can address the future. For more information about Dr. Bauerlein and his book, visit http://www.dumbestgeneration.com/.

Dr. Bauerlein’s other books include “Negrophobia: A Race Riot in Atlanta, 1906,” “Literary Criticism: An Autopsy,” and “Civil Rights Chronicle: The African American Struggle for Freedom.” Other books include “A Handbook of Literary Terms,” with Dana Gioia and X. J. Kennedy, “The Pragmatic Mind: Explorations in the Psychology of Belief,” and “Whitman and the American Idiom.” His articles and reviews have appeared in The Wall Street Journal, The Washington Post, Atlanta Journal-Constitution, The Weekly Standard, Reason Magazine, Yale Review, Partisan Review, and The Chronicle of Higher Education.

Mark Bauerlein earned his doctorate in English at UCLA in 1988. He has taught at Emory since 1989, with a two-and-a-half year break in 2003-05 to serve as the director, Office of Research and Analysis, at the National Endowment for the Arts.