HAMPTON, Ga. – On a brisk Saturday morning at the historic Nash Farm Battlefield Park on the outskirts of Atlanta, the Arkansas State cross country teams found their edge en route to a pair of historic finishes at the 2019 Sun Belt Conference Championships.

A-State’s women saw one of its best performances in program history, capturing the women’s crown for just the second time, while the men followed up with their highest Sun Belt finish ever, placing second overall. Additionally, cross country coach Jesse Duvall was voted as the conference’s women’s coach of the year at the conclusion of the event. 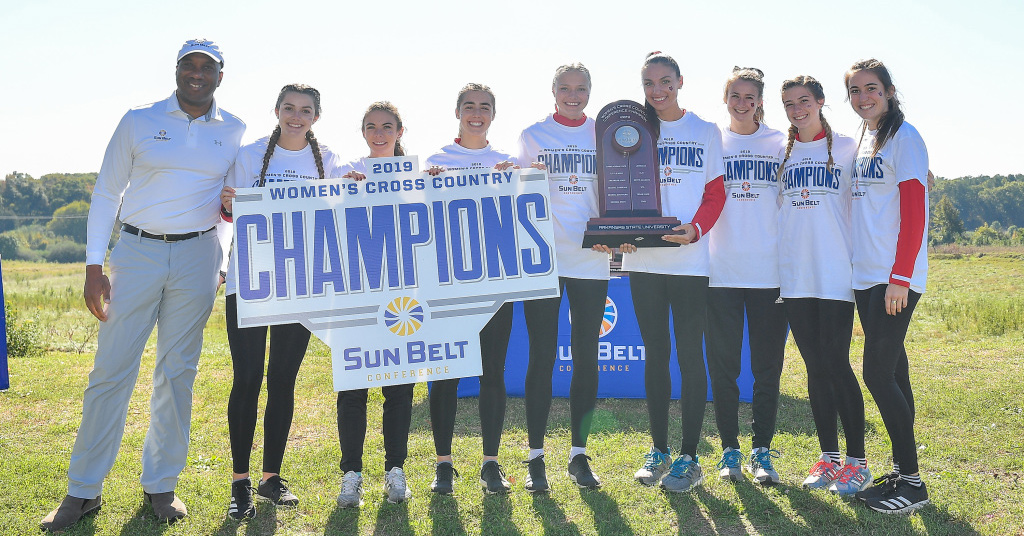 The historic day began with the Red Wolves taking the women’s conference title for just the second time in program history and the first since 2013. A-State’s finish came after being predicted to finish third in the preseason. Preseason favorite Texas State placed fourth as a team.

Individually, the Red Wolves’ championship came on the legs of five top-20 runners, including three All-Sun Belt Conference honorees. As she has all season, Pauline Meyer paced the squad with a second-place finish in a personal-best 17:26.6 – the highest finish by a Red Wolf since Kristina Aubert won the individual title in 2013. The second-place finish also garnered Meyer first-team all-conference honors, making her the second in as many seasons after Anaelle Charles placed third a year ago.

Elizabeth Gillette was the second A-State runner to cross the finish in 17:45.6, earning a sixth-place finish to receive second-team All-SBC honors. Her time was also a collegiate best. Sophie Leathers brought home third-team all-league accolades with an 11th-place finish, running a collegiate-best 18:01.4. Madison Grimm (18:14.6 – personal best) and Sophia Oury (18:18.0) finished 18th and 20th, respectively, to round out the top five for the Red Wolves. Sammy Brainard (33rd – 18:59.1) and Elizabeth Martin (48th – 19:17.9) also benefitted the cause, earning top-50 finishes to help keep the Scarlet and Black atop the team leaderboard.

Through the 3K splits, Meyer hung in at second overall, with Gillette not far behind at sixth. Leathers sat at 12th while Oury and Grimm rounded out A-State’s top five at 14th and 19th at that point in the race.

Not much changed down the stretch, as that quintet held strong to give the Red Wolves five top-20 finishers and three top-15 runners. Individually, Georgia State’s Lotte Meyberg won the women’s 5K with a run of 17:11.7 to finish ahead of Meyer.

In the men’s race, A-State held strong at second throughout the entire race. Through the first 2K, the Red Wolves were 27 points behind the leader, UTA, with four A-State runners in the top 20. A lot of movement occurred through the next 2K, but A-State stayed put at second after Appalachian State took the team lead from the Mavericks.

At the 6K mark, the final standings started to take shape, with all 10 teams sitting in spots that would prove to be the finishing results. A-State held strong at second overall in a tight race for the No. 2 spot at 83 points with UTA and Coastal Carolina right behind at 87 points and 89 points, respectively.

The Red Wolves would hold on to claim the second-place team finish by one point, edging out the Chanticleers 82-83.

Appalachian State claimed the men’s conference title as a team, while Coastal Carolina’s Nadeel Wildschutt took the individual crown in 23:29.0.

The Red Wolves will continue the postseason on Friday, Nov. 15, at the 2019 NCAA South Regional Championships, held at the University of Arkansas’ Agri Park cross country course. A-State is looking to continue its success in Fayetteville after the women placed ninth and men 11th in the high-caliber Chile Pepper Festival earlier in the season.