JONESBORO – The Department of Music at Arkansas State University will present the Wind Ensemble in their second concert of the fall semester on Thursday, Nov. 12, at 7:30 p.m. in Fowler Center’s Riceland Hall.  Admission is $5 for the public and free to A-State students.

“This concert is special because it kicks off the 2015 A-State Conducting Colloquium, the eighth time we have hosted this event. Our guest conducting clinician this year is Dr. Rodney Dorsey, the director of bands at the University of Oregon,” states Dr. Timothy Oliver, director of bands and conductor of the Wind Ensemble. “Additionally, we are featuring our own, Dr. Bruce Faske, on a tremendously exciting piece for solo trombone and wind ensemble called ‘Harvest: Concerto for Trombone’ by John Mackey.”

The program will include “Valdres” by Hanssen and arranged by Glenn Bainum.  The group also will perform “Elegy” by John Barnes Chance under Dorsey's direction.

The ensemble will follow up with “Theme and Variations, Op. 43a” by Arnold Schoenberg, and “Harvest: Concerto for Trombone” by John Mackey, which will feature Faske, instructor in music, as the trombone soloist.

“John Mackey’s trombone concerto, 'Harvest,' is a tour-de-force for all participants, including the Wind Ensemble, conductor and soloist,” says Faske.  “Throughout the 18-minute journey, Mackey successfully weaves the two most compelling tonal qualities of the trombone, namely beautifully lyrical phrasing and animalistic shouts of rage, into one of the most entertaining and crowd engaging solo compositions written for my instrument." 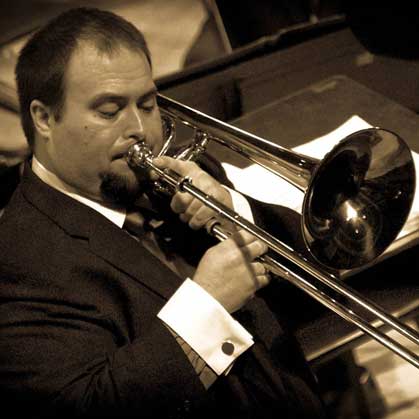 “This concert is special because it kicks off the 2015 A-State Conducting Colloquium, the eighth time we have hosted this event"