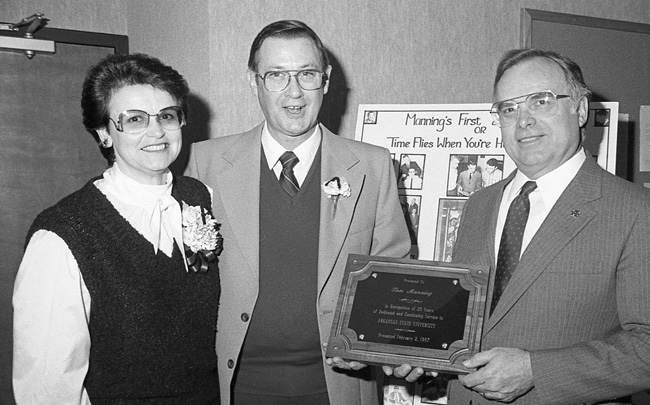 At the celebration of his 25th anniversary as an A-State employee in 1987, Tom Manning is joined by his wife Mary as he receives a recognition plaque from then-President Eugene W. Smith (right).

JONESBORO – High school students in the communities where Tom and Mary Manning were raised will be eligible for a new scholarship program established in the couple's name at Arkansas State University.

Mary Manning, now a resident of Cherokee Village, is establishing the scholarship with an initial gift of $75,000 to Arkansas State.  She has committed additional annual gifts of $75,000 over the next five years, increasing the total endowment to $450,000.  The endowment will provide a full tuition scholarship each year to students in the couple's home communities.

Tom grew up in Walnut Ridge and Mary grew up in Caruthersville, Mo., before attending Arkansas State, where they met and earned degrees in journalism and education, respectively.  They married and raised two daughters, Karen and Leisa, while pursuing the careers for which their A-State education had prepared them.  Tom passed away in 2018.

The Tom G. and Mary E. Manning Scholarship will be awarded each year to a graduate of Walnut Ridge High School and Caruthersville High School.  Selection will be based on scholastic record and financial need, with secondary preference to students majoring in the programs in which the couple majored, journalism and education.

"Tom and Mary Manning's positive experiences as students at Arkansas State laid the foundation for wonderful careers in their respective fields," stated Chancellor Kelly Damphousse.  "All of us at A-State are grateful for their devotion to students, and for this generous gift that will support generations of future students from the communities where they were raised."

“Arkansas State has been very important in the lives of my family, to include many extended family members.  Tom and I loved A-State and wanted to leave a lasting legacy for the benefit of students,” Mary noted.  “This scholarship program should help provide future A-State students from our respective hometowns the ability to attend a quality university that they may not have otherwise been able to afford.”

Starting his first job at A-State in 1962, Tom brought attention to student-athletes and their successes through his work as director of the Sports Information Office.  Then he became fulltime director of the News Bureau, generating countless articles recognizing students for their academic achievements and campus leadership, whether it was the Dean's List, Who's Who honorees, or student government officers, along with publicizing campus events.

While serving as adviser to the yearbook staff for many years, Tom instilled the importance of documenting student life at Arkansas State, and managed the tedious process of organizing the student portraits, with name and hometown, for publication in the "Facebook" of the time.  He also helped tell the story of the institution's evolution from Arkansas State College to Arkansas State University.

When Tom became the first full-time director of Alumni Relations in 1984, heading a new office, he never relented in his quest to document each of Arkansas State's alumni, and to locate those with whom the university had lost contact.

While he was not a classroom teacher, Tom was a true educator during his 35-year career at A-State, conveying to associates and student assistants a sense of responsibility and dependability for carrying through on every project.  His positive impact on countless future journalists and communicators could never be measured.

While Tom was making the living in the couple's early years, Mary devoted her time to raising the girls and taking care of matters at home.  Later she completed her degree in elementary education and began teaching.  She soon went on to complete a master's degree in reading education.

Mary was constantly dedicated to the success of her students.  She enhanced her professional experience through involvement in the National Education Association and Kappa Delta Pi honor society for educators.

One of the first teachers in the region to attain certification in gifted and talented education, Mary saw it as a very effective way to help outstanding students take full advantage of opportunities and to develop their full potential.  She made good use of the certification, developing programs through which top students could excel.

Mary's teaching career, through which she guided young children in their educational development, took her to public school classrooms at Weiner, Cherry Valley and Nettleton, where she eventually retired.

Mary and Tom supported each other in all of their endeavors, and countless students benefited in the public schools where she taught, and at Arkansas State.

The scholarship endowment at A-State, named in honor of Tom and Mary Manning, will provide support to many generations of the students they constantly strived to inspire and motivate through their respective careers in education.

Information about giving to Arkansas State University is available through the Office of Development, which is located in the Cooper Alumni Center, (870) 972-3940.