Life At A-State Has Been Best Days For Rugby Player

JONESBORO, Ark. — When Shaun Potgieter first came to the United States, he could have easily remained to play another sport. Things have a way of turning out differently. He has played rugby since he was six years old and his talents steered him toward that sport. The senior from Port Elizabeth, South Africa is glad it did.

Potgieter, a 6-3, 215-pounder, quickly established his presence on the rugby field at Arkansas State University and is one of the program’s most gifted players. The rugby expert is playing his final home match Saturday, April 5, at 1 p.m. against one of A-State’s biggest foes—Life University.

“I was recruited by Curt Huckaby while touring the U.S. in 2008,” said the exercise major. “I started attending Arkansas State in the fall of 2009.”

That decision set off a chain of events that separated Potgieter apart from other athletes when it came to rugby. During his Red Wolf career, he has received all-America honors, while playing with the 2011 15’s team with his team playing against visiting universities from New Zealand, the 15’s team in 2012 that toured Ireland, and twice in 2013 with the15’s team that toured New Zealand and the 7’s team that won the Serevi Rugbytown tournament at Infinity Park in Glendale, Colo. He is also an honorable mention selection for the all-America 15’s team in 2010.

In addition, as a team captain, he helped Arkansas State to capture two back-to-back national championships in 2012 and 2013. But this weekend, he’s focused on facing Life University.

“In my opinion, the Mid-South conference is the toughest competition in the USA and Life University has a similar great rugby program to Arkansas State, run by Dan Payne, which makes us mammoth rivals,” added Potgieter. “I have always had respect for their team and I know they have respect for us. To beat Life University would mean the world to me and the team as the result would take us to No. 1 spot in our conference.”

Leadership comes naturally to Potgieter. Throughout his athletic career, he has served as a team captain in a variety of sports.

“My father taught me integrity, to lead from the front, be committed and be self-disciplined,” continued Potgieter. “He also taught me to respect my teammates, your opposition, coaches and match officials. Finally, to lead the Arkansas State Red Wolves team is an honor, and I would like to thank my past and present coaches who have entrusted me with this title. A special thanks to all my past and present teammates, because without them, I would not have achieved all these accolades.”

Potgieter considers himself lucky to be mentored by the Arkansas State coaches. He started his career being coached by the legendary Huckaby who started the rugby program at A-State.

“He was followed by his son Matt Huckaby, Alex Houser, and currently Coach NeMani Delaibatiki, a New Zealander who has taken the rugby program to another level,” Potgieter said. “I can really be thankful to have had excellent quality coaches at A-State, all of whom have had a tremendous impact on improving my rugby skills.”

“From a coach’s perspective, Shaun has been a great leader, a unanimous decision by the coaches when we first were looking for one,” said A-State’s first-year head coach NeMani Delaibatiki. “Being a leader seems to come naturally to him. Both on and off the field, Shaun is a great example of what a captain should be and because of that, his teammates naturally rally around him when he leads them on the rugby pitch on game day.”

Life at Arkansas State for Potgieter hasn’t been all hard work and rugby. As he prepares to close his academic and athletic career at Arkansas State, he notes that key memories for him include participating in the various variety shows on campus and winning Greek Adonis his freshman year. He joined Pi Kappa Alpha fraternity and made a bunch of new friends.

“Rugby tours are always great fun with my teammates from various countries,” he said. “I also enjoyed working in the Student Union as I have been exposed to students from so many different cultures.”

Potgieter acknowledges the toughest challenge of his entire student career is not having his parents nearby.

“My family is extremely close, but I have learned to become independent from the time I set foot in the USA after leading a very sheltered life at home,” he said. “My parents have supported me wherever possible over the past five years, and it is just as tough for them being so far away from my sister and me. She is married and studying political science here at Arkansas State.”

The future looks bright for Shaun Potgieter as he hopes to join a men’s rugby club in Texas once he graduates from A-State. Among his goals, he will be working and playing rugby and plans to settle down in the United States.

As he closes out his time as a Red Wolf rugby player, Potgieter will step on the field against Life motivated and take care of business.

“On a personal note, I would recommend A-State to any potential rugby player or student as the rugby and academic programs are of a very high standard,” he concluded. “Rugby has allowed me the privilege of visiting more than half the states in the USA and other countries. As the lyrics of a famous song goes, ‘Those were the best days of my life.’” 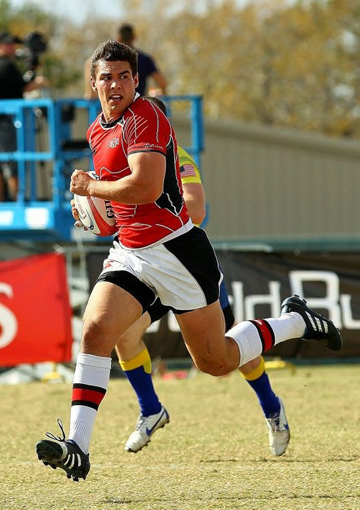