JONESBORO – Ten seniors in the College of Media and Communication at Arkansas State University were honored during a Convocation of Scholars ceremony Thursday evening as the college's most outstanding graduating students.

Sarah Seibert of Cabot, a strategic communication major, was recognized as the 2016 Chancellor’s Scholar, according to Dr. Brad Rawlins, dean.  The Chancellor’s Scholar is the graduating student in each college who has the highest grade point average.

Two students, Jade Allen of Trumann and Bethany Roberson of Judsonia, were named recipients of the Robert L. Hoskins Award, which is named in memory of the founding dean of the college. The award is based primarily on professional achievements outside the classroom.

The department awards, based on scholarship, leadership, and service, were presented to the top student in each degree program.  Those graduating in August and December of 2015 as well as May of this year were eligible.

More than 25 students received awards and recognitions and nearly 50 additional students were recognized for receiving scholarships. 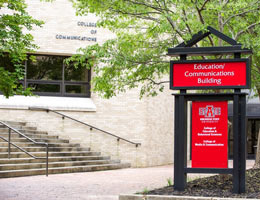