JONESBORO — Earl Morris, a senior from Jacksonville who will graduate from Arkansas State University in May with a double major in biology and chemistry with an emphasis in pre-pharmacy, received the R.E. Lee Wilson Award for 2015 at the 82nd Student Honors Awards ceremony Thursday evening at Cooper Alumni Center.

The recipient is selected from a group of seven Distinguished Service Award winners honored at the ceremony. Perry Wilson, the great-great grandson of R.E. Lee Wilson, presented the award to Morris.

The Wilson Award is presented annually at the Student Honors Awards ceremony to the university's outstanding graduating senior. The recipient is selected on the basis of character, determination, involvement, leadership, participation and academic achievement. This honor is bestowed in memory of R. E. Lee Wilson, a member of the Arkansas State University Board of Trustees from 1917 until his death in 1933. Presentation of the award began in 1934. 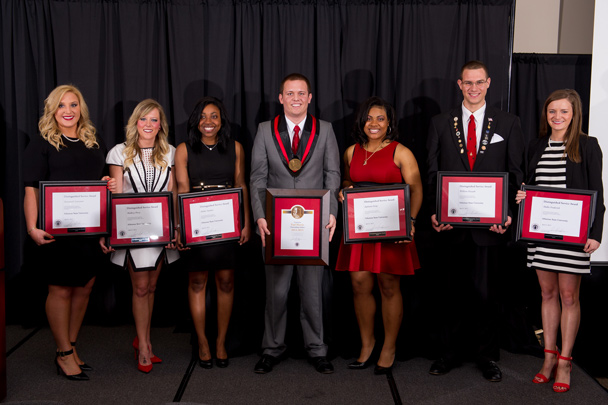 Morris, who has a 3.85 cumulative grade point average, is a member of the Dean’s and Chancellor’s lists as well as the Honors Director’s List. An Honors College student and A-State Scholar Scholarship recipient since 2011, Morris was nominated by Rebecca Oliver, director of the Honors College.

Among his academic accomplishments, Morris finished in first place in the 2014 Create @ STATE STEM undergraduate poster presentation and second in the chemistry presentation. He also came in second in the AR P3 (Plant Powered Production) symposium poster display.

The recipient of the Dr. Glenn D. Cooper Memorial Scholarship in 2014-15, Morris also received the V.C. and Bertie H. Kays Educational Scholarship for Academic Excellence and served as a National Science Foundation (NSF) intern during the summer of 2014. He is a 2014-15 nominee for Who’s Who Among Students in American Universities and Colleges and received a thesis research grant from the College of Sciences and Mathematics in the fall of 2014.

Active in fraternity activities for Lambda Chi Alpha, Morris was named the organization’s outstanding new member in Greek life in 2013. He served as scholastic and alumni chairman and a board member of LXA at Arkansas State to aid in management of the fraternity house.