JONESBORO – Working on and around theatre for years, Bob Simpson should be comfortable with moving to the newest stage of his career.

Effective July 1, Simpson accepted new responsibilities as director of Fowler Center, Arkansas State University's premier space for the visual and performing arts since its opening in 2001.

The job really is not new at all, given he has handled the duties since the previous director resigned.  He has been interim director while continuing to serve as chair of the Department of Theatre.

With a Master of Fine Arts degree in theatre design and technology from the University of Mississippi and his Bachelor of Fine Arts from Arkansas State, Simpson joined the faculty in 1993.  He was technical director and director of theatre before becoming department chair.

"I am humbled and proud to have been chosen to follow the likes of Jerry Biebesheimer, Jeff Brown and Wendy Hymes as director of Fowler Center," Simpson said.  "I learned a great deal about the job from each of them during their tenure and hope I will be able to continue the tradition of excellence in management and production."

Simpson and his colleagues in fine arts will present an overview of the upcoming Fowler Center season during the annual "Sneak Peek" on Thursday, July 23, beginning at 5:30 in the Grand Hall.

"I look forward to the coming season with a sense of pride and excitement," he continued.  "I am confident with our selections, the staff and I are sure our patrons will not be disappointed.  Can’t wait to 'break a leg' this coming season."

His teaching specialties include stagecraft, lighting, theatre management and theatre history, while his research interests include theatre architecture and technology.  Among his many professional awards, he received the Faculty Achievement Award for Service in 2000.

Also active in his profession beyond campus, he is affiliated with the Association for Theatre in Higher Education, Theatre Communications Group and National Association of Theatre.  He has designed for the Arkansas Repertory Theatre and various theatres in Branson, Missouri. 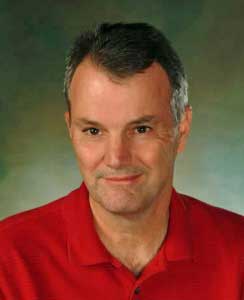