JONESBORO – The second presentation in Arkansas State University's Lecture-Concert Series for 2016-17 will be a concert by Alash, an ensemble of master throat singers from the Tuva, a Russian republic bordering Mongolia.

The ensemble will perform Tuesday, Sept. 20, at 7:30 p.m. in Fowler Center, Riceland Hall. Admission is free.  Additional funding support for the program is provided by the College of Liberal Arts, Department of Music, Diversity Program and Student Composers, Inc., student chapter.

While members of the group are inspired by the music of the great musicians of Tuva and Central Asia, they are also influenced by such western artists as Sun Ra and Jimi Hendrix, according to Dr. Tim Crist, chair of the Lecture-Concert Committee.  They have collaborated with such diverse musicians as the innovative jazz ensemble Sun Ra Arkestra, the beatboxer Shodekeh, and Béla Fleck and the Flecktones. 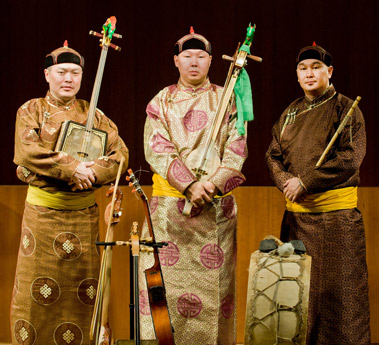