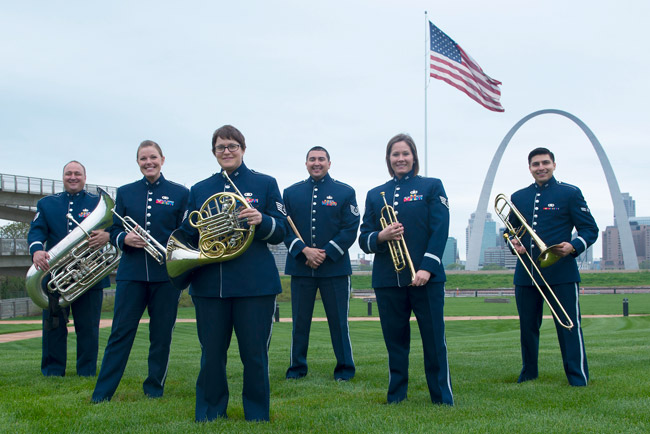 The concert will begin at 5 p.m. in the Recital Hall of the Fine Arts Center (GPS 2412 Quapaw Way).  Admission is free.

With the traditional instrumentation of two trumpets, French horn, trombone and tuba plus percussion, the ensemble is known for its versatility and outstanding musicianship, according to Dr. Tim Crist, chair of the Lecture-Concert Series committee.

A component group of the Band of Mid-America, their performance repertoire spans five centuries, from the glorious antiphonal sounds of the Renaissance to the rich diversity of American musical styles.

Whether a military march, jazz standard or an original arrangement of patriotic favorites, each Airlifter Brass program is thoughtfully planned for a blend of inspiration and entertainment.

Its repertoire has universal appeal and includes special programming for younger audiences. This ensemble not only performs in concert halls and civic events, but also adds a distinctive presence to official military ceremonies and events of state.

These six gifted players proudly represent the skill and professionalism of the U.S. Air Force as musical ambassadors before military and civilian audiences throughout the band’s 10-state area of responsibility.