JONESBORO, Ark. — For those fans unable to make the trip to Mobile, Ala., Jan. 5 to see Arkansas State defeat Ball State, 23-20, at the 2014 GoDaddy Bowl or who just want to relive and reflect on the exciting bowl experience, A-State’s website is providing a series of links depicting the various events throughout the weekend.

Along with the special bowl highlight video seen on Facebook and Vimeo, the page includes bowl weekend highlights from the team’s arrival in Mobile to the hoisting of the championship trophy. To access, go to the astate.edu home page and click on the “Learn More” link on the sliding news bar which reads, “Relive the 2014 GoDaddy Bowl.”

CBSSports.com writer Tom Fornelli ranked all of the college football bowl games using a formula to determine how exciting all of the games were and placed Arkansas State's win over Ball State as the seventh best game of the bowl season.

The victory is the second consecutive GoDaddy Bowl for the Red Wolves and the third straight appearance for A-State.

Among the highlights are all other videos and features seen on A-State social media, a conversation with alum Johnny Allison who received the Champion of Life award, scenes from the Wintzell’s Alumni Reception, and a pre-game interview with former Red Wolf and Baltimore Raven great Bryan Hall. 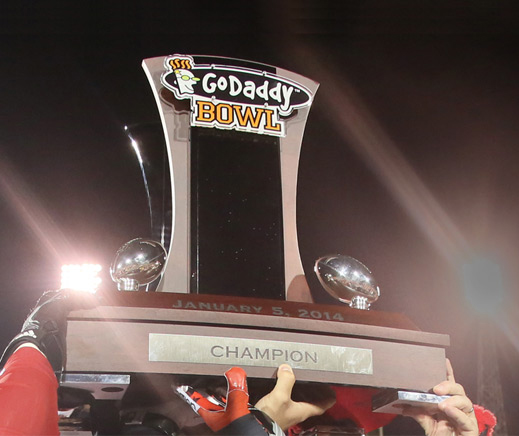