JONESBORO – With a theme this year of "Engaging New Voices," Arkansas State University will observe Sexual Assault Awareness Week, Monday through Friday, April 10-14, by presenting special events to broaden public understanding of the issues across the campus community. 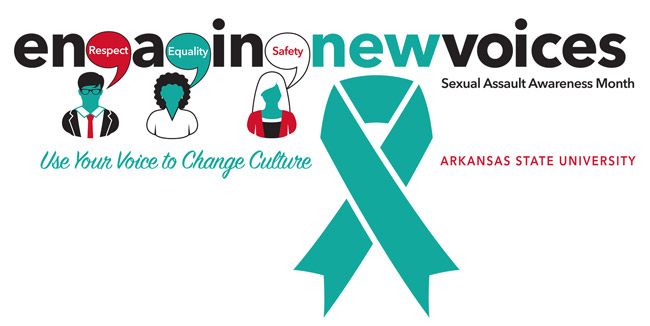 Activities from 10 a.m. to 2 p.m. each day in the Reng Student Union will bring attention to the week and its significance, according to Chocoletta Simpson, director of the Office of Affirmative Action and Title IX coordinator, who has been planning the week since January.  The annual Sexual Assault Awareness campaign was first established in the 1990s.

"Increasing awareness around the issues related to sexual violence and assault is imperative to the safety of our campus community," Simpson emphasized.  "These scheduled events are educational yet interactive ways to address and discuss sexual assault."

Monday, April 10, is "cyber Monday" because students can pick up a teal ribbon in the Reng Student Union and take a "selfie" then post their photo on social media using the hashtags #SAAM and #DayofAction.  The teal ribbon symbolizes awareness of Sexual Assault Awareness Month.

Students may "spin the wheel" during Tuesday's activities, then attempt to answer a question correctly to win a prize, determined by where the spinning wheel stops.

Wednesday's activities will focus on consent, and individuals' understanding of what it really means.  In addition to the information booth, an evening panel discussion about sexual assault myths and concerns is planned for 5:30 p.m. in the Spring River Room of the Reng Student Union.  Alpha Kappa Alpha sorority, Eta Upsilon chapter, is a presentation partner and session host.

Thursday's information session will emphasize messaging for Sexual Assault Awareness Week, with pictures and artwork available to inspire ideas for sidewalk drawings. Ice cream will be served to those visiting the information booth.

Winding up the week on Friday, students will write letters of support to sexual assault victims.

Throughout the week, A-State students also may participate in the ongoing charity event during which they may donate items needed for victims of sexual assault.  All donations will go the Family Crisis Center, Inc.; tissues and paper towels are suggested.

Additional details about Sexual Assault Awareness Week are available from Simpson, csimpson@AState.edu, and the Office of Affirmative Action, (870) 972-2015.