JONESBORO – Anima, an early music ensemble, will be the next performer in the Lecture-Concert Series at Arkansas State University.  The group's work has been called "approachable virtuosity – fresh, joyous and powerful music-making" that brings the music of 400 years ago to life.

Their program, "Postcards from Orpheus," will be Tuesday, Jan. 26, beginning at 7:30 p.m. in the Fine Arts Center Recital Hall (GPS 2412 Quapaw Way).  Admission to this and other events in the Lecture-Concert Series is free.

In addition to the Lecture-Concert Series, funding support is provided by the Department of Music, College of Fine Arts, the Student Composers, Inc., chapter, the Office of Diversity, and the A-State Orchestra.

Dr. Sarah Jones Hayes, instructor in music at A-State, predicted the group's presentation will be special.

"Our students and our community will enjoy hearing early music as performed on period instruments.  The concert gives us the opportunity to hear this talented group's interpretations and gives us insight into the performance practices of the period in which these pieces were composed."

Dr. Timothy Crist, professor of music and chair of the Lecture-Concert Committee, added the audience will enjoy hearing "music from the Ars Subtilior and early Baroque periods played on instruments very rarely heard in our region.  Motomi Igarashi's performance on the viola da gamba and lirone alone will leave a beautiful, lasting memory. The music of this concert will transport all to a different time and place in history."

In addition, Anima will present a public lecture and demonstration at 11 a.m. that day, also in the Recital Hall.  They also will perform for children at the Visual and Performing Arts Magnet School.

Anima specializes in music for small ensemble and voice. Like its name (from Latin, meaning soul or breath), the group breathes new life into music from the Baroque and late Renaissance, with a transparent, shimmering sound from their unique continuo team of harp and gamba or lirone.

They present the story of Orpheus through music by Luigi Rossi, Jean Baptist Lully, Juan Hidalgo, Leopold I of Vienna and others.

The group features soprano Beth Anne Hatton, Baroque violinist Vita Wallace, viola da gambist Motomi Igarashi, and harpist Christa Patton, and often expands to include other kindred spirits, such as mezzo-soprano Hayden DeWitt, violinist Julia Wedman, and harpsichordists Barbara Weiss and Dongsok Shin. As individuals and as a group, the artists have performed and recorded with period instrument ensembles throughout the eastern United States and internationally.

For more details about the series, interested individuals may visit the Lecture-concert Series website,http://www.astate.edu/lectureconcert, or contact Crist, tcrist@astate.edu, (870) 972‑2094. 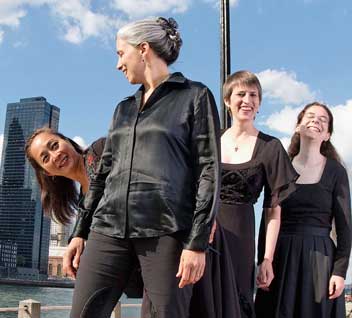