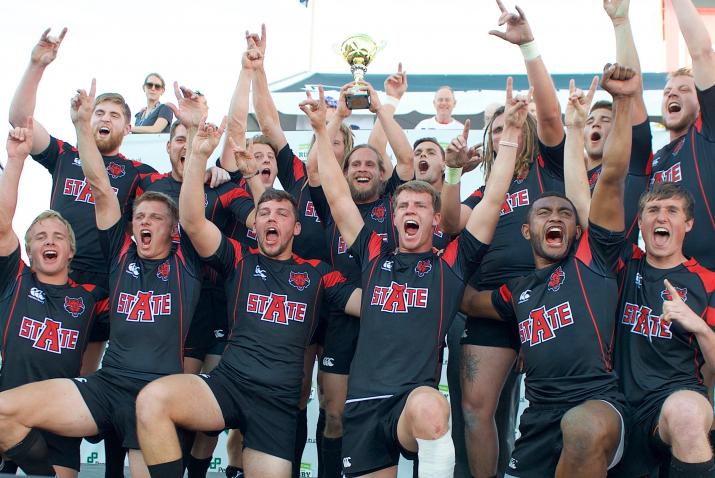 Photo by and courtesy of Ian Muir.

AIC sat a couple of their thoroughbreds, Christian Adams and Adrian Ray, to start the semifinals, and the Hawks proved a handful. Eventually, the Yellowjackets separated and built a 31-12 advantage before the Hawks mounted a mini comeback as time expired to make the final difference 31-22.

Arkansas State had a tougher time in the other semifinal. The score was neck and neck at halftime, and the Zoomies dotted down at the onset of the second stanza. Arkansas State’s kickoff didn’t go 10, and Benjamin Burmester rumbled through a couple of tackles en route to pay dirt, putting Air Force up, 21-12. Arkansas State didn’t panic, though, and a couple of big plays from Michael Baska secured two late tries and pushed the Red Wolves toward the win, 26-21.

Arkansas State would again trail by two tries in the final before coming back for the win.

“We’ve got a lot of good leaders up front – Dylan Carrion and [Tom Haussrer] kind of kept the guys composed – and I think that lesson coming into the final helped us come in here,” said A-State coach Mani Delaibatiki. “Getting tested like that against Air Force and staying composed is what got us to this game here.”

AIC took the first lead in the championship game, diving over about 90 seconds in. The Yellowjackets looked to be in a couple of times before actually crossing, but a stiff Arkansas State defense made them work for it. The difficult conversion was missed, leaving it a 5-0 game.

The Red Wolves leveled the table with a try by Haussrer. AIC’s Jihad Khabir booted the ball downfield and attempted to outrace Red Wolf Glen Eriksen, but the Red Wolves freshman gathered the ball and put AIC on attack.A penalty later Haussrer was off for the score.

Hard hitting AIC regained the lead after a big stick on an ASU ball carrier dislodged the pill, resulting in a try in the corner. The conversion was missed, making it 10-5 to AIC. That’s how the half would end.

Christian Adams looked like he was going to put the Red Wolves deeper in the hole at the start of the second half, toting the ball about 70 meters before being tag-teamed by Dylan Carrion and Eriksen. A-State was called for a penalty in that ruck, and another inside its own 22, but patient and firm defense created a turnover and saw Arkansas State go the other way for the tying try and go-ahead conversion.

The Red Wolves nearly took the two-score lead with about two minutes left, when a loose ball chipped ahead was knocked on at the doorstep of pay dirt. AIC won the ensuing scrum, but Adams dropped the ball in the try zone, and a pressuring Connor Cook forced him to touch it down, giving ASU an attacking five-meter scrum.

Arkansas State was pushed back to near the 22 but eventually broke through for a try under the posts, and the easy conversion made the score out of reach, despite there being time enough for one more kickoff.

The win means Arkansas State, winners of the last two USA Rugby College 7s National Championships, will make its debut in the CRC in May with a four-year winning streak intact. See more at: http://www.rugbytoday.com/college/arkansas-state-punches-ticket-crc#sthash.5Rpr0pwp.dpuf.